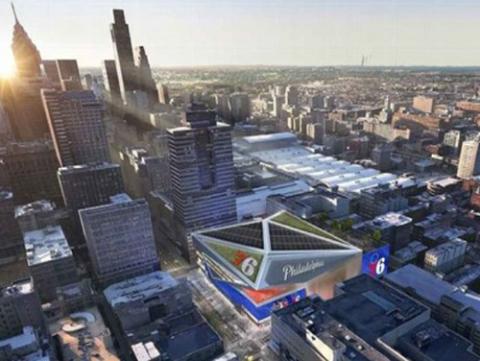 What Fashion District and Center City will look like when the 76ers take up residence in downtown Philly.

When the NBA’s Philadelphia 76ers lease ends with the Wells Fargo Center in 2030, it will be moving downtown to a new arena that will take over a third of Macerich’s Fashion District mall and attempt to up the pace on Market Street.

“We're committed to building a world-class home in the heart of the city and creating a privately funded arena that strengthens ties within the local community through investments that prioritize equity, inclusivity, and accessibility," said 76ers managing partner Josh Harris.

Leading the effort will be real estate wunderkind David Adelman who, at age 13, invested $2000 of his Bar Mitzvah money into Campus Apartments, where he is now CEO. One of the company’s first big developments took shape at the University of Pennsylvania, where living standards have improved and crime rates have dropped steadily in the University City neighborhood since its completion.

Adelman said that with 10 years to get the estimated $1.3 billion project done, he envisions the outcome to be a new and revitalized Center City.

“The mall hasn’t lived up to its full potential,” Adelman told Forbes. "We will open up the ground floor and invite people in for a place to congregate. My view is the best anecdote for safety and security is feet on the street. We think this does that."

Adelman is taking the project on in partnership with Harris Blitzer Sports Entertainment. They will work with Macerich in working out a new retail and food and beverage plan in concert with Fashion District.

"The chosen location is a key step in the process of developing a destination that provides Center City and surrounding communities with an economic engine generating activity through 76ers and youth games, concerts, events and more," said Adelman.