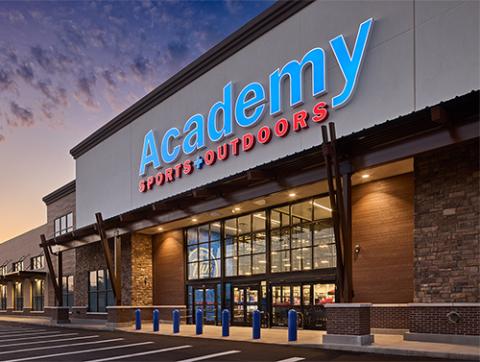 Academy Sports + Outdoors plans to open 80 to 100 stores during the next five years.

The sporting goods and outdoor recreation retailer is expanding its footprint in Florida with its first locations in the Tampa Bay area. Academy will open at The Shoppes at Park Place in Pinellas Park in winter 2022 and at Cypress Creek Town Center in Wesley Chapel in 2023, giving it a total of 15 locations in the Sunshine State.

Additionally, Academy plans to open its first stores in Virginia and West Virginia later this year.

In April, Academy opened its first new store in two years, in Conyers, Ga. The company has set a goal of opening 80 to 100 stores during the next five years. Currently, it has 260 stores across 16 states.

The new locations will carry a wide range of sports and outdoors products from top brands that include Nike, Adidas, Columbia, The North Face, Chubbies, Costa and Under Armour. The assortment also features Academy's private label brands such as Magellan Outdoors, Freely, H2O Xpress, R.O.W., BCG and Mosaic.

Customers can also take advantage of a suite of in-store services that will include free assembly on grills and bikes, scope mounting, bore sighting, line winding/spooling, propane exchange and the ability to purchase hunting and fishing licenses.

"The Tampa Bay community can expect to find all the products they need for their sports and outdoors passions when they walk into our store, " said Sam Johnson, Academy's executive VP of retail operations. "Tampa Bay is not only known for its enthusiastic sports fanbase but also boasts renowned fishing, beaches and outdoor activities.”