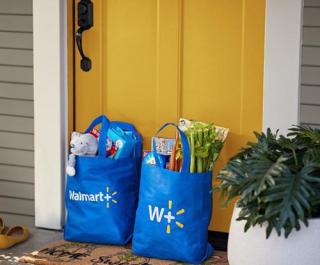 Amazon and Walmart can both claim victories in their increasingly intense competition in the e-commerce realm.

According to a new study from online selling platform Jungle Scout, Amazon is expected to end 2021 with over $468 billion in global e-commerce revenue. This is roughly six times Walmart’s expected 2021 global online revenue of $75 billion.

However, Jungle Scout analysis also finds that Walmart’s e-commerce sales could increase by as much as 89% year-over-year in 2021, more than five times the 16% online sales growth it predicts for Amazon. Amazon holds a 40% share of the U.S. e-commerce market, compared to Walmart’s 7% share.

In addition, one-third of Amazon third-party sellers believe Walmart’s online presence will compete strongly with Amazon’s online presence in 2021 and beyond, and more than one in five (22%) of Amazon sellers are worried about competition from Walmart.

Amazon-exclusive and Walmart.com-exclusive online shoppers displayed similar rates of buying many products, such as clothing (35% Amazon vs. 33% Walmart.com), beauty/personal care (25% vs. 22%), and home & kitchen (17% vs. 16%). Amazon-exclusive shoppers only showed significantly higher likelihood to purchase electronics (19% vs. 11%). In contrast, Walmart.com customers reported much higher purchase rates in product categories including groceries (41% vs. 20%), cleaning supplies (30% vs. 17%), and over-the-counter medicine (29% vs. 10%).

Jungle Scout also uncovered a number of other interesting comparative statistics about Amazon- and Walmart.com-exclusive shoppers:

Insights from this report were sourced from Jungle Scout’s 2021 Consumer Trends Report, a quarterly, anonymous survey of over 1,000 adult U.S. consumers about their buying preferences and behaviors. The majority of analysis in this report compares Amazon shoppers to Walmart or Walmart.com shoppers. This report also draws from Jungle Scout’s 2021 State of the Amazon Seller Report, an annual study of nearly 5,000 Amazon entrepreneurs, business owners, and major brands.