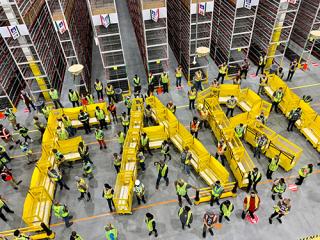 Amazon employees celebrate the opening of a new fulfillment center in Fargo, N.D.

Amazon is adding to its supply chain infrastructure in the Peace Garden State.

Employees started working within Amazon’s new 1 million-plus-sq.-ft. fulfillment center in Fargo, N.D., on Sunday, Sep. 19. Initially announced in November 2020, the new center is the largest structure in the state of North Dakota in terms of square footage.

At the new non-sortable fulfillment facility in Fargo, associates pick, pack, and ship bulky or larger-sized customer items such as patio furniture, outdoor equipment, or rugs. Amazon’s first investment in the state was a delivery station in West Fargo, which is still operational.

Amazon intends hundreds of associates to work at the center in the months and years ahead.The facility will continue hiring over the next few weeks.

Prior to beginning operations in the new Fargo fulfillment center, the company says it had invested over $200 million in North Dakota between 2010 and 2020) including infrastructure and compensation to employees. Other direct and statewide impacts include more than 2,000 small and medium business sellers and independent authors in North Dakota working with Amazon. According to the company, it has added over $150 million to the state’s gross domestic profit based on its investments.

Amazon’s new supply chain hub in North Dakota is part of a broader aggressive expansion strategy that includes building out infrastructure and hiring new employees. The e-tail giant, which is set to open over 100 new buildings in September 2021 alone, has also opened more than 250 new fulfillment centers, sortation centers, regional air hubs, and delivery stations across the U.S.

Amazon also recently announced plans to hire an additional 125,000 full- and part-time employees across the U.S. This news came the day before the company’s Sept. 15 Career Day event, where it hoped to hire more than 40,000 corporate and technology roles across 220-plus locations in the U.S., as well as tens of thousands of hourly positions in its operations network.

According to Amazon, more than 1 million people globally applied for 40,000 corporate and technology roles across 220-plus locations in the U.S., as well as tens of thousands of hourly positions in its operations network. Amazon has hired more than 450,000 people in the U.S. since the beginning of the pandemic, and says it is now the largest job creator in the U.S.

“We are excited to have this fulfillment center up and running, which will allow us to deliver more packages, in a faster time frame, to our customers in North Dakota, Minnesota and South Dakota.,” said John Sabo, Amazon GM, Fargo. “We are committed to employing hundreds here in the Fargo-Moorhead region and to offering a very competitive employment package with opportunities for growth, advancement and post-secondary education.”

“North Dakota welcomes this significant investment, which will bring high paying jobs to our state, further connect North Dakotans into the global commerce system and increase the speed of delivery of products to our residents,” North Dakota Gov. Doug Burgum said.