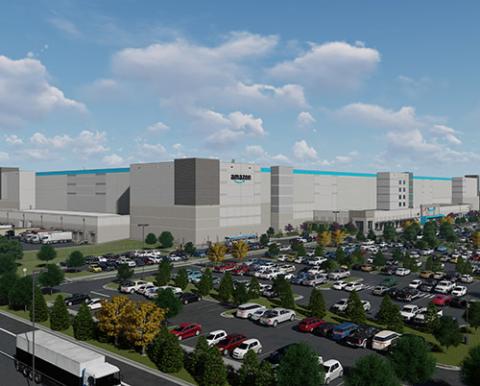 Amazon will open a robotics fulfillment center and a delivery station in the Hoosier State.

The e-tail giant is planning to open the two new buildings in Elkhart County, Indiana in 2023, in an effort to support operations closer to customers. The facilities are expected to create more than 1,000 new jobs locally.

Employees in the new 800,000-sq.-ft. fulfillment center will work alongside Amazon’s robotics technology. The building will be used to pick, pack, and ship smaller customer items, such as books, electronics, and consumer goods.

Meanwhile, the new 180,000-sq.-ft. delivery station will enable the last mile of Amazon’s order process and is designed to help increase efficiency of deliveries for customers. Delivery stations also offer entrepreneurs the opportunity to build their own business delivering Amazon packages. In addition, independent contractors can work delivering for the Amazon Flex service.

During 2021 to date, Amazon says it has opened more than 250 new fulfillment centers, sortation centers, regional air hubs, and delivery stations in the U.S. The company opened over 100 more buildings in September alone.

Roles in fulfillment and transportation offer an average starting wage of more than $18 per hour, and up to $22.50 per hour in some locations. The positions are also eligible for Amazon's new Career Choice program, in which the company will pay full college tuition for its frontline employees as part of a larger $1.2 billion investment to expand education and skills training for its U.S. workforce.

“We’re thrilled to announce a new state-of-the-art fulfillment center and delivery station in Elkhart County as we continue to invest in the state of Indiana,” said Kyle DeGiulio, Amazon’s regional economic development manager. “Indiana has been a great place to do business, serve customers and drive opportunity; as a result, we’re proud to have created more than 20,000 jobs and invested more than $15 billion in the Hoosier State over the past decade.”

“Amazon’s decision to support Elkhart County is a huge vote of confidence in our workforce development initiatives,” said Suzanne Weirick, president, board of commissioners, Elkhart County, Indiana. “The new, high-paying jobs in the distribution technology sector also help diversify our local economy and protect us from the national economic fluctuations. Since investments by Amazon tend to attract related industries, we look forward to additional interest in Elkhart County by other high-tech companies.”

Since 2010, Amazon says it has created more than 20,000 jobs in Indiana and invested more than $15 billion across the state, including infrastructure and compensation to its employees. According to Amazon, its investments have contributed more than $13 billion in gross domestic product to the Indiana economy and have helped create over 29,000 indirect jobs on top of Amazon’s direct hires—from jobs in construction and logistics to professional services.

In addition, the company says more than 22,000 authors, small and medium-sized businesses, and developers in Indiana are selling their products and services via its Fulfillment by Amazon third-party logistics offering.