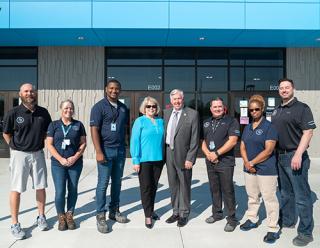 The facility processes about 42,000 products every day, which can increase to 70,000 products daily during the holidays. Since opening, the fulfillment center has created 1,400 jobs.

During an opening event attended by Missouri Gov. Mike Parson, Amazon announced it will invest in at least 400 more jobs at the facility before the end of the year, creating more than 1,800 positions there by the 2021 holidays. With the addition of the fulfillment center, which spans the equivalent of 22 football fields, Amazon says it has now created more than 9,000 full and part-time jobs in Missouri since 2010.

Amazon’s new supply chain hub in Missouri is part of a broader aggressive expansion strategy that includes building out infrastructure and hiring new employees. The e-tail giant, which is set to open over 100 new buildings in September 2021 alone, has also opened more than 250 new fulfillment centers, sortation centers, regional air hubs, and delivery stations across the U.S.

Amazon also recently announced plans to hire an additional 125,000 full- and part-time employees across the U.S. This news came the day before the company’s Sept. 15 Career Day event, where it hoped to hire more than 40,000 corporate and technology roles across 220-plus locations in the U.S., as well as tens of thousands of hourly positions in its operations network.

According to Amazon, more than 1 million people globally applied for 40,000 corporate and technology roles across 220-plus locations in the U.S., as well as tens of thousands of hourly positions in its operations network. Amazon has hired more than 450,000 people in the U.S. since the beginning of the pandemic, and says it is now the largest job creator in the U.S.

“Our associates are the heart of Amazon in Missouri and beyond,” said Amazon’s Republic GM Andrew Lee. “We are thrilled to open our first fulfillment center in the Republic-Springfield area and empower our people with upskilling opportunities for a long career at Amazon.”

“This is yet another significant investment by Amazon in the state of Missouri and further demonstrates our state’s emergence as a leading logistics hub,” Missouri Gov. Mike Parson said. “This expansion is an excellent opportunity for Missourians in the Southwest part of the state to join a company that offers good-paying jobs and great benefits. Amazon’s investments are transforming Republic and the Springfield area, and we look forward to helping Amazon continue to find success in our state.”

Prior to beginning operations at the new Republic fulfillment center, Amazon said it had invested more than $2 billion in Missouri, including infrastructure and compensation to employees, during the past decade (2010-2020). According to Amazon, $1.5 billion has been added into state GDP as a result of its investments. Other direct and statewide impacts include more than 24,500 small and medium-sized businesses and independent authors in Missouri selling products with Amazon.