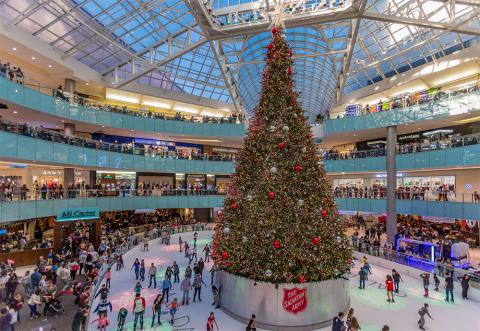 Galleria Dallas was last year recognized by Chain Store Age as the No. 3 Retail Center Experience in the nation.

Galleria Dallas, known as the presenter of one of the best Christmas celebrations in mall-dom, has six new presents to offer its loyal shoppers.

The enclosed center with the skating rink and the 95-foot-high Christmas tree has announced that six new brands will be taking up residence in the Trademark Property-operated center in the coming months.

Timed for Mother’s Day, Kendra Scott will host a pop-up next to Sephora from May 6 to May 8, offering up women’s jewelry, candles, and watches. The brand has also introduced a new men’s line this year, it’s 20th anniversary.

Stance, the sock seller that partnered with Kobe Bryant in his last NBA season and that placed Bart and Homer Simpson on folks’ feet, will open its first Texas store next to Apricot Lane in May.

A Dallas-Fort Worth shop that sells the work of local artists, Flea Style will open its first mall location at Galleria and introduce its shoppers to owner Brittany Cobb’s hat bar where customers can customize their headgear with vintage scarves, jewelry, dried flowers, and feathers.

Piercing Pagoda’s Banter brand will open in July next to Build-a-Bear; the Canadian retailer of women’s clothing and accessories, Garage, will park itself next to Starbuck’s, and women’s jeweler Bearfruit plans to open at Galleria later in the summer.

Galleria Dallas last year was named the No. 3 Top Retail Center Experience in America by Chain Store Age for its high-powered holiday series of events. Its “Snow Day Dallas” presents 12 holiday-themed scenes at which guests use bracelets to activate photos of their poses, and thousands skate around the tree in the center’s rink. In 2020, the five-week holiday celebration and drew 16,000 visitors from 770 Zip codes.