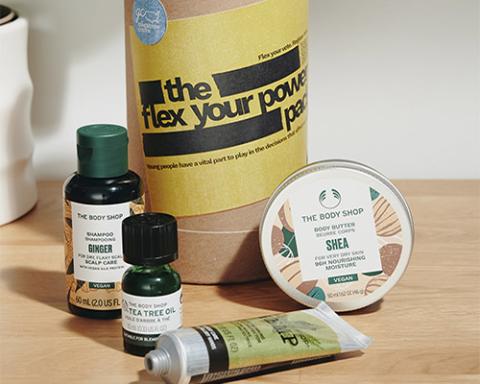 The Body Shop has launched a get-out-the-vote initiative.

In keeping with its activist reputation, The Body Shop U.S. is working to get out the vote.

The company has launched an initiative to drive youth voter engagement and registration ahead of the mid-term elections this November.   As of August 12, shoppers at the retailer’s U.S. stores and website can learn about the importance of voting in this year's elections, check their current registration status and even register to vote through the brand's virtual voting hub, made possible by Impactree and TurboVote.

Young voters in the U.S. typically participate in elections at rates of 20% to 30% lower than older voters and routinely face structural barriers to doing so, including complicated rules about absentee voting, state-by-state ambiguities and lack of civic education, according to The Body Shop.

“The Body Shop believes that youth need a seat at the table where important decisions are being made, especially rulings that directly affect them," said Hilary Lloyd, VP of marketing and corporate responsibility for The Body Shop North America. "Over the last few years, we have been deeply inspired by how young people have flexed their political voice through direct protesting, lobbying their representatives and advocating for causes online. Now, we're proud to help amplify their voices at the ballot box."

The Body Shop has a long history of activism, particularly in the environmental area. In April, the company announced it was rolling out its refill program in stores across the U.S. in an effort to reduce plastic use.

The Body Shop U.S. is partnering with Generation Citizen, a national nonpartisan organization that equips and inspires young people to exercise their civic power, to educate and motivate young people to engage in the democratic process in this year's midterm elections and beyond.

The retailer also is launching a 'Flex Your Power Pack' made up of its skincare and body care products, which includes travel-size versions of the brand's bestsellers. For every pack sold, The Body Shop will donate $1 up to $25,000 to Generation Citizen to support the organization's work in civics education.

The Body Shop’s get-out-the-vote effort is an extension of Be Seen. Be Heard, the global campaign from The Body Shop and the United Nations Secretary-General's Envoy on Youth, which is focused on amplifying youth perspectives and representation in public life in more than 75 countries. The campaign was launched at the UN headquarters in May.