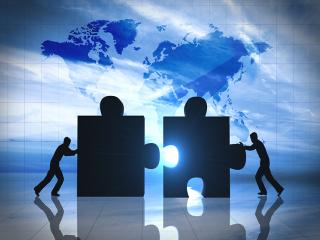 Supervalu is being acquired in a deal that will result in the former supermarket giant’s exit from grocery store retailing.

The company said Thursday that it is being acquired by grocery wholesaler United Natural Foods in a transaction valued at approximately $2.9 billion, or $32.50 per share in cash, including the assumption of outstanding debt and liabilities. The deal would create one of the nation’s largest food distributors, combining Supervalu’s strength in conventional grocery items with United Natural Foods’ emphasis on natural and organic products.

The deal will also mark the final stage of Supervalu’s exit from supermarket retailing. The combined firm plans to divest Supervalu’s retail assets “in a thoughtful and economic manner.” No schedule was given. During the past two years, Supervalu has been shifting its emphasis from its retail to grocery wholesale business. In May, the company completed its previously announced sales of 21 of its 38 Farm Fresh stores to three different retailers. Supervalu currently operates 114 supermarkets under the Cub Foods, Hornbacher’s and Shoppers banners.

The transaction, which has been approved by the boards of both companies, comes just three weeks before Supervalu’s shareholders were scheduled to vote on whether to replace the board of the company with a slate of candidates backed by activist investor Blackwells Capital LLC who took a stake in it about a year ago. The firm has been urging the sale of Supervalu’s remaining stores.

"The combination of United Natural Foods and Supervalu provides a substantial premium and delivers certainty of value to our stockholders, meaningful benefits to our customers, expanded opportunities for our employees, and the ability for us and our vendors to efficiently serve a varied customer base," said Mark Gross, CEO, Supervalu. "We have been executing an ambitious strategic transformation for over two years. We believe that this transaction is the best and natural next step for our stockholders, customers and employees.”

"Combining our leading position in natural and organic foods with Supervalu's presence in fast-turning products makes us the partner of choice for a broader range of customers,” Spinner said. “These benefits, plus our increased efficiency and productivity, will enable us to create value for our shareholders, enhance opportunities for our suppliers, provide a broader assortment for our customers and create new prospects for our associates over the long term."

The transaction, expected to close in the fourth quarter of 2018, has been approved by the boards of directors of both companies and is subject to antitrust approvals, Supervalu shareholder approval and other customary closing conditions.
Advertisement