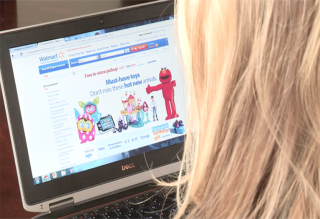 Walmart is heading into the crucial holiday season on fire, with the chain posting a 50% increase in online sales in its third quarter and topping the Street's profit, revenue and comp sales estimates.

Same-store sales for U.S. stores, excluding fuel, rose 2.7%, compared with an anticipated increase of 1.8%. It was Walmart's 13th consecutive quarterly increase. Comp traffic was up 1.5%.

Walmart reported net income of $1.75 billion, or 58 cents a share, which included a $283 million charge to account for a likely fine related to an ongoing Foreign Corrupt Practices Act violation investigation. Excluding that charge and other one-time costs, Walmart earned $1 a share, topping Wall Street estimates of 97 cents per share.

Industry experts said that Walmart's strong quarterly performance show that its heavy investments in digital and store enhancements, along with heavy discounting, are paying off.

"Today's results show that Walmart is a retailer on the front foot," commented Neil Saunders, managing director of GlobalData Retail. "Admittedly, the investments it is making in price and e-commerce are taking their toll on the bottom line, but they are also positioning the company for significant future success."

Walmart raised its full-year earnings expectations as it heads into the holiday season. It now forecasts adjusted earnings per share ranging from $4.38 to $4.46 in fiscal 2018. It previously expected earning $4.30 to $4.40 a share.

"We have momentum and it's encouraging to see customers responding to our store and e-commerce initiatives," stated Walmart president and CEO Doug McMillon. "Existing customers have become advocates for popular initiatives like online grocery and free two-day shipping, and as a result, new customers, suppliers and partnerships are coming to Walmart."

Last week, Walmart announced a partnership with Lord & Taylor, that will see Walmart launch an online “flagship store” on Walmart.com that will offer premium fashion brands directly from the department store retailer. The discounter is also is building relationships with premium brands, including Bose and KitchenAid.

"Walmart's longer-term aim is clear: It wants to become the go-to online destination for both every day and specialty items," said Saunders. "The push into higher-end products should also help to bolster online margins."
Advertisement