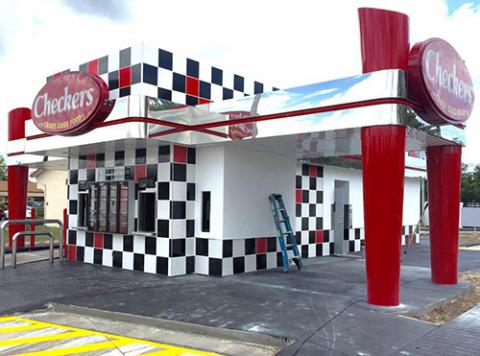 Checkers & Rally will open at least 60 new locations this year.

The drive-thru restaurant chain is accelerating its growth plans for 2022 as it continues to expand nationwide. In 2021, Checkers & Rally executed 90 new commitments towards new restaurants. The company has already approved 60 new franchisee locations scheduled to open this year and is eyeing continued expansion in California, Texas, Arizona, Massachusetts, Connecticut and North and South Carolina.

Earlier this month, Checkers & Rally's unveiled its “restaurant of the future” design, with the first location expected to open later this year, in Lakeland, Fla. It also has announced plans to roll out automated voice ordering.

"As we enter a New Year full of new opportunities, our goal is to continue our rapid growth and expansion into new markets that are currently underdeveloped," said Kristen McDonald, VP of development at Checkers and Rally's, which has 850 locations. "Our smaller store footprint, modern new building design, emphasis on technology implementation and double drive-thru format will help the company remain poised to meet growing customer demand and scale successfully moving forward.”

"We are very pleased with the momentum Checkers & Rally's maintained in 2021 as we successfully rolled out in multiple new markets and saw rapid growth on the East and West Coasts," said Frances Allen, CEO, Checkers & Rally's. "Given the unprecedented challenges within our industry, the company's success is a strong testament to our hardworking employees and franchisees, and I'm very proud of all that we have accomplished this year and have in the pipeline for 2022."