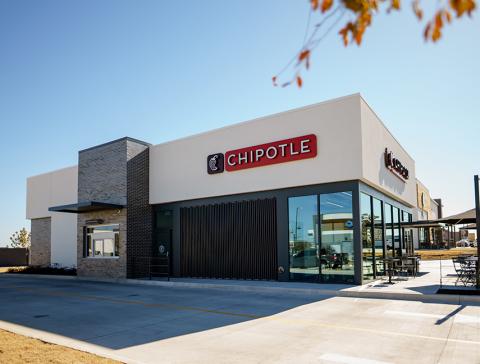 Chipotle opened 51 new restaurants during its most recent first quarter.

Chipotle Mexican Grill reported first-quarter earnings and sales that topped Street estimates despite challenges from inflation and the Omicron variant.

The quick-serve chain opened 51 new restaurants during the quarter, giving it a total of approximately 3,000 locations. Chipotle, which owns and operates all its own restaurants, said it has plans to open 235 to 250 restaurants this year (assuming that permitting and construction delays related to the pandemic don’t worsen.)

“We’re not even halfway to our goal of reaching 7,000 restaurants in North America and are building a real estate pipeline that will accelerate new unit growth in the range of 8% to 10% per year,” chairman and CEO Brian Niccol told analysts on the earnings call.

Of the 52 restaurants that Chipotle opened during the quarter, 42 included “Chipotlanes,” drive-thru lanes dedicated to digital orders.

“Chipotlanes continue to outperform non-Chipotle locations due to the convenience, which is encouraging since digital order pickup is our highest margin transaction,” Niccol told analysts. “We continue to look for ways to increase access and convenience through alternate restaurant formats, digital-only menu offerings and leveraging our large and growing loyalty program.”

Niccole also addressed the issue of restaurant staffing on the call. He said that 85% to 90% of Chipotle restaurants are being staffed “at model.”

The company has rolled out an array of initiatives to attract and keep workers, including higher wages and referral bonuses. It also is exploring ways to automate its restaurant operations to take away the parts that are not particularly employee-friendly. The company is piloting a customized autonomous kitchen assistant from Miso Robotics, nicknamed “Chippy,” to cook and freshly season tortilla chips.

Digital transactions accounted for 41.9% of total orders, down from 49% in the prior quarter. But in-restaurant sales jumped by 33.1% compared with the year-ago period.

Food, beverage and packaging costs in the first quarter were 31.0% of total revenue, an increase of 100 basis points compared to the first quarter of 2021. The company said the increase was due to inflation across the menu, primarily due to beef, avocados, and paper, and was partially offset by leverage from menu price increases.

Restaurant level operating margin was 20.7%, a decrease from 22.3% in the first quarter of 2021. The decrease was primarily due to increases in hourly wages and higher food costs, partially offset by leverage from menu price increases and lower delivery expenses.

“Although our restaurant margins remain bumpy due to inflation, we have the ability to be patient while costs are volatile, and the growth in pricing power to recover our margins over time,” Niccol told analysts on the earnings call.