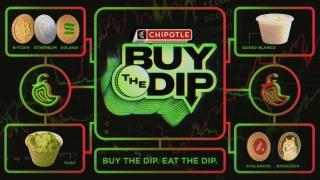 Chipotle Mexican Grill is accepting digital currency, including cryptocurrency, and is letting customers know in a playful way.

The quick-service retailer is partnering with pure digital payments platform Flexa to accept digital currencies for “real world” food orders. Customers can use a Flexa-enabled app to make payments at Chipotle in 98 different digital currencies, including Bitcoin, Ethereum, Avalanche, Solana, and Dogecoin.

To spread the word about its entry into the digital currency space, Chipotle is launching a new interactive game called "Buy The Dip" that will give away more than $200,000 in free cryptocurrency. The promotion will also grant digital-only codes for one-cent guacamole and 1-cent Queso Blanco through July 31, “National Avocado Day.”

The game will be open from 10am to 6pm PDT each day through Sunday, July 31. Customers must have or create a Chipotle Rewards loyalty account to participate.

The game is afoot at Chipotle

Chipotle has actively embraced gamification as a promotional tool, including games with crossovers into the Web 3.0 space (which includes digital currencies as well as NFTs and the metaverse). In June 2021, the retailer introduced a video game called Chipotle Race to Rewards Exchange.

Part of its Chipotle Rewards loyalty program, the interactive racing game challenged players to earn game points and avoid obstacles for a chance to win a 2021 Tesla Model 3 and other prizes.

The quick-service retailer offered a limited-time virtual storefront and maze experience that included free burrito codes for use on digital orders, Chipotle-inspired costumes for virtual avatars, and a “Chipotle Boorito Maze” with exclusive virtual items that could be unlocked.

Most recently, the company launched “Chipotle Burrito Builder” on Roblox. The April 2022 simulation experience challenged customers to roll burritos in the metaverse to earn “Burrito Bucks,” Chipotle’s in-game currency on Roblox, starting on Thursday, April 7, which was also National Burrito Day. The first 100,000 Roblox players to successfully roll a burrito earned enough Burrito Bucks to exchange them for an entrée code that can be used on the Chipotle app or its U.S. or Canadian e-commerce site.

"We want to build the next generation of Chipotle fandom by connecting with the Web3 community," said Chris Brandt, chief marketing officer, Chipotle. "We're excited to bring positivity to the crypto conversation by empowering fans to 'Buy The Dip.'"

Chipotle Mexican Grill Inc. had over 3,000 restaurants as of March 31, 2022, in the United States, Canada, the United Kingdom, France and Germany, and is the only restaurant company of its size that owns and operates all its stores.