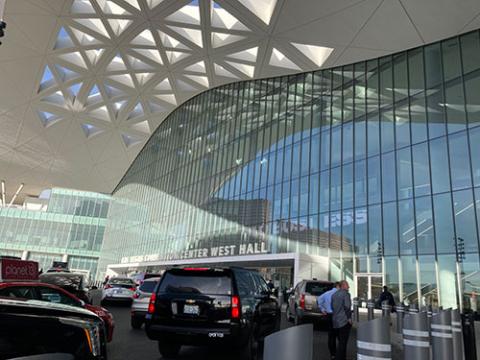 Developers, brokers, and retailers convene at RECon in Las Vegas for the first time in 18 months.

Booths were smaller and many regular booths were missing (CBRE and several other large exhibitors held meetings off-site). The crowd was pegged at under 10,000, less than one-third its usual size, and was almost entirely dispersed on the show’s second day. But ICSC members got important business done.

“On Monday, our booth was packed and we had round-the-clock meetings,” said Jan Hanak, Regency Centers’ VP of marketing and communications.

Indeed, every mall and shopping center developer interviewed by Chain Store Age said their leasing volumes were up over 2019 levels. Naveen Jaggi, the president of JLL’s retail advisory services, said that transactional business in the industry this year has been 75% higher than in 2020.

“COVID accelerated the demise of sick retailers and under-performing malls. It was healthy for the industry,” said Fred Meno, CEO of The Woodmont Company, which operates regional malls, open-air centers, and outlet centers. “The best retailers will now be locating in better-performing malls.”

Sandy Sigal, the CEO of Newmark Merrill, which runs open-air and mixed-use centers, said that Amazon taught operators of physical retail centers that they have to properly program their centers for the communities in which they reside

“Shopping centers today are like nightclubs,” Sigal said. “You go to a city where there is a district full of bars and you’ll have one that is packed every night and one next door that is empty and dies. It’s not so much the location, it’s the programming.”

PREIT CEO Joe Coradino, who disposed of 19 malls going back nearly a decade at the mall owner, said that renovation of the industry is long overdue.

“We’re still terribly over-stored with old concepts. What we need are even more experiential tenants to present to our customers,” Coradino remarked.

CEO Carmen Spinoso, whose Spinoso Real Estate Group runs some 40 malls and is aggressively seeking to acquire more, said that communities that contain malls need to re-think how they treat department store anchors in order to keep them.

“A lot of department stores like Belk and Dillard’s are trying to be better retailers, but they also need municipalities to play ball. They can’t charge them ransom for things like TIF financing,” Spinoso said.

But Yaromir Steiner, the CEO of Steiner + Associates, which operates Easton Town Center in Columbus, felt that he and his colleagues had their own re-thinking to do.

“If 20% of malls are going away, where will the retailers that built their businesses in malls, brands like Victoria’s Secret and Gap, put their stores to grow?” Steiner said. “It leaves us wondering about what is the new platform we need to create for these brands. If you have a 60,000-sq.-ft. store in a market with one mall and it closes, where do you put that store now? It’s something we have to think about.”