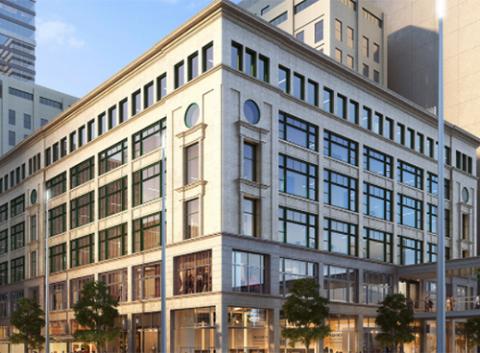 The Dayton's Project in downtown Minneapolis is back in the hands of its original developer.

After an investor attempted to take over control of the remade Dayton Dry Goods building in Minneapolis this year, the original developer of the property has arranged for $250 million in financing to regain the lead role in the redevelopment.

More than 100 years ago, the 12-story building 700 Nicollet Mall in downtown Minneapolis was Dayton’s flagship store before Macy’s took over the space. Four years ago, 601W Companies undertook a complete makeover of the building including office and retail space including a 45,000-sq.-ft. food hall, a green rooftop terrace, and a health club.

But the pandemic stalled leasing of the 300,000 sq. ft. of retail space on the first three floors and Monarch Alternative Capital acquired the mezzanine debt position of what is now called The Dayton’s Project earlier this year and attempted to repossess the building.

Though the developer was not in monetary default on its loan, Monarch claimed that 601 W Companies was in technical default for not meeting various “leasing hurdle” dates.  601 W, in return, accused Monarch of attempting a “predatory loan-to-own scheme.”

Over the past 25 years, 601W has acquired many substantial and well-known commercial properties throughout the country, aggregating more than 45 million square feet with a collective value in excess of $12 billion.