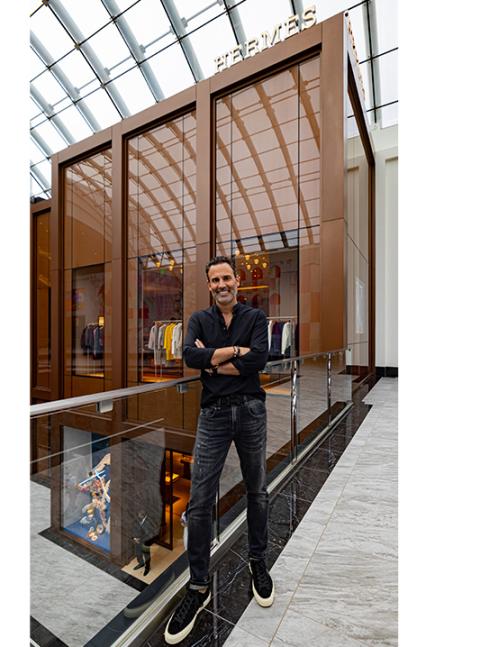 It can be said that the Ghermezian family and their company, Triple Five, invented retail entertainment 40 years ago with the opening of West Edmonton Mall, featuring a theme park, a water park, an ice rink, and an indoor lake complete with a dolphin show and 4 fully functioning submarines. They then duplicated the concept at Mall of America and, later, in New Jersey.  There, with American Dream, CEO Don Ghermezian is taking “retailtainment”—and retail itself—to new levels. We sat down with him to discuss his latest bold undertaking.

Before we get into the strategy driving what you’ve presented the public at American Dream, what’s the foot traffic like over there?
During the recent Spring Break, our 11,000 parking spots were full by noon with over 160,000 people having visited our center daily. A recent guest survey learned that 92% of guests have visited American Dream four or more times since their first visit, an absolutely mind-blowing statistic.

Your entertainment venues are what bring a lot of them to the property, yes?  Give us a rundown of what you have there.
American Dream features world-class attractions such as Nickelodeon Universe Theme Park, DreamWorks Water Park, an NHL-sized ice rink, Big SNOW — North America’s first and only indoor ski resort, Seal Life Aquarium, Legoland Discovery Center, and two 18-hole miniature golf courses, just to name a few. This month, we opened the Dream Wheel, a 300-foot observation wheel that provides exceptional views of the NYC skyline. We have hosted thousands of birthday parties this past quarter and are well on track for over 10,000 parties this year.

In planning American Dream, did you start with a concept that would define the project?
Yes, at American Dream, we envisioned and brought to life a retail entertainment center with such a wide array of offerings that there is something for everyone to come for and revisit on a regular basis. Everyone can visit and have a fun-filled day exploring our plethora of attractions, retail stores, and dining options. The more discriminating shopper can spend the day at The Avenue, our premier luxury retail collection, shopping at Hermès and Saks, dining at world-class restaurants, be chauffeured in one of our Rolls-Royces, or flown in one of our helicopters to and from our helipad.

How does your entertainment ring the registers in your massive retail galleries?
Our hundreds of retail stores are surrounded by top-tier weatherproof attractions bringing in local residents, domestic and global tourists, corporate groups, as well as celebrities every day of the year. The foot traffic generated by our attractions brings in masses of people in numbers unparalleled in the retail center world.

Some of the stores national chains have opened there are among the biggest they have, correct?
Our flagship Zara store is the largest in any retail center in the world. We have New Jersey’s only Saks Fifth Avenue, Hermès and Saint Laurent flagship stores, It’Sugar -- the world’s first and only candy department store, a flagship H&M, the largest Primark in the United States, a 25,000 sq. ft. Uniqlo store. Toys “R” Us bypassed Fifth Avenue and Times Square to open their only store in the United States here at American Dream. Apple and Gucci are opening flagship stores in the near future. Saint Laurent is doubling the size of their current store.

What else is still under development?
A 45,000 sq. ft. Hasbro-themed family entertainment center, a Skip Barber go-karting racetrack, a rock-climbing gym, a trampoline park, an escape room, the New Jersey Hall of Fame, a live exhibition center, two hotels, a movie theater, two new museums, a penguin habitat, a 3,000- seat performing arts center. Recently, following sold-out shows by Tiësto and Steve Aoki in our theme park, Live Nation approached us to form a partnership to activate exclusive entertainment through American Dream. We had over 250 events in Q1 alone and with the Live Nation partnership and anticipate that number to grow to over 2,000 annually.

Previous developers failed at their attempts to develop this property. How’d you get it done?
We were able to harness 40 years of experience, a well-developed operating system, and a highly professional executive team to replicate the successes at our other centers.