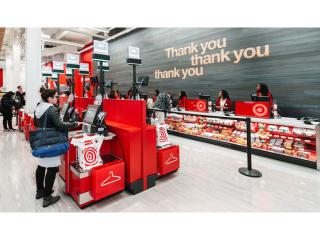 Today's results from Target serve as confirmation that the American retail sector is enjoying a renaissance. With a good cross-section of customers and a broad exposure to many categories, Target serves as a reasonably good bellwether for the consumer mood. A sales uplift of 7.0%, supported by a 6.5% rise in comparables -- the best result in 13 years -- proves that sentiment is upbeat and spending fairly carefree.

That said, it would be unfair to credit all of Target's strong numbers to economic conditions. Indeed, Target performed well above the market at the overall level, and in terms of the growth produced at both stores and via its digital channels. In essence, it is outpacing rivals and taking market share. In our view, there are several things that underpin this success.

The first is the investment in stores. The elevated experience at both newer and refurbished shops is driving both customer traffic and conversions, which is one of the reasons why shops contributed 4.9 percentage points to comparable sales growth. For non-food in particular, the shopping experience is more pleasant and engaging with many more points of inspiration and interest. In essence, Target has given people reasons to come and visit and is encouraging them to spend when they do. Despite opposition from some quarters, we have always supported Target's view that having a modern store base is a critical component of success.

Alongside the uplift in store ambiance has been the investment in and the development of exclusive own lines. Target has been extremely active on this front, building on the success of labels like Goodfellow & Co and Pillowfort, with launches of several new lines including Wild Fable, Original Use, Heydey, and Made By Design. We think these collections are well put together and nicely targeted at different types of shopper needs. In stores, Target has supported the lines with smart promotional materials and has avoided the old trap of merchandising everything in the same way and on the same fixtures. The result is a very compelling and unique group of brands each with a distinct appeal and handwriting.

The results speak for themselves. For example, our data show that Target's appeal and its penetration of clothing shoppers have both increased steadily thanks to its new lines. There have been particularly sharp uplifts among younger and family shoppers, who are visiting more often and spending more on apparel when they do. The fact that the popular labels are exclusive to Target means that these gains are more easily defended, provided Target keeps on innovating and delivering what the customer wants. We also believe that execution could be better in terms of the uniformity across stores.

New stores, especially smaller format ones opened in urban areas and on college campuses, have also given Target's growth a boost. These formats are working well and are proving to be extremely productive. They are giving Target access to markets and constituencies that it previously didn't serve and, as such, they add to revenue rather than cannibalizing sales from existing stores. They give Target scope to drive further gains by modest physical expansion over the next few years.

Today's strong sales numbers have been delivered alongside an uptick in profits. Admittedly, margins dropped slightly due to higher digital fulfillment costs, but this has been offset by improved merchandise margins on non-food and higher revenue. As a consequence, operating income is up by a respectable 3.6%.

Looking ahead, Target has only modest prior year comparables, so we believe it will be able to produce further strong results and end the year with a flourish.
Advertisement