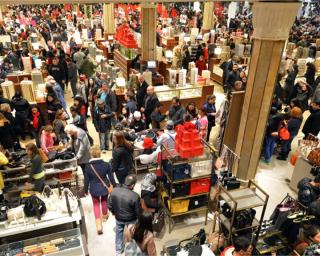 Retailers enjoyed a solid but not spectacular Black Friday shopping weekend, as online and in-store promotions proliferated earlier in the week and on Thanksgiving, cannibalizing sales that once occurred on Saturday and Sunday, the “demand pull-forward” phenomenon.

Combined with an early Thanksgiving, the demand pull-forward will also shift the traditional early December lull to a late November shopping lull. The good news is that plunging gasoline prices—down $0.35/gallon since mid-October—are giving a mid-season boost to available discretionary spending. Rising disposable income is the major driver of higher holiday sales, but the gasoline savings are giving consumers an unexpected early present under the tree, and may yet turn holiday spending from strong to stellar.

Based on CGP’s 18th annual Holiday Forecast, and updated by CGP’s 18-researcher nationwide field team’s detailed store surveys at over 100 benchmark shopping venues, the past Black Friday weekend showed solid but not record growth, with approximately $60 billion in sales (including online) for the four-day weekend, in line with its estimates. Still, several categories shined:

Consumer electronics and appliances: +6.4%, up from CGP’s forecast 6.1%

General merchandise: +5.2%, up fractionally from the forecast.

The promotional pace was similar to last year, with 75% of major retailers offering the same Black Friday promotions as in 2017 — and the others increasing promotional intensity by only 5-10%.

The key takeaway is that shoppers and stores alike will have a happy holiday this year — assuming retailers can maintain their margin discipline. This will be the second year of 5%-plus retail growth, for the first time since 2005-2006. Looking forward, the key issue is whether this pace can be sustained into the new year and beyond. But unlike the debt-based bubble economy that led to the recession, today’s spending growth is built on a solid platform of job growth, income gains and sensible saving rates, so prospects for sustained growth into the future are improving each month.