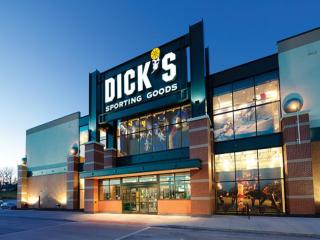 Neil Saunders, managing director of GlobalData Retail, commented that a number of unfavorable dynamics played into Dick’s sales decline, with the foremost being a shift in where people buy sporting goods.

“Here the company is facing a pincer movement,” he said. “At the higher and more professional end of the market, consumers are migrating to dedicated specialists like Lululemon and Nike. These players offer a more streamlined and focused assortment of relevant product in a more compelling setting. The same thing applies to exercise equipment where, despite the ongoing failure of a large player like Sears, Dick's is not managing to succeed in the same way as more specialist firms like Peloton. Within the everyday sporting segment, non-specialists like Target and Kohl's are attracting more shoppers as they improve their athletic offerings.” For more analysis, click here.

Dick’s said its online sales, adjusted for the calendar shift, rose 16% in the quarter. E-commerce accounted for 12% of total net sales in the quarter, up from 10% in the year-ago period.

“Our continued improvements in gross margin and disciplined expense management more than offset our strategic investments, and contributed to increased profitability compared to last year,” said chairman and CEO Edward Stack. “Comparable sales were within our range of expectations, including continued headwinds in the hunt and electronics categories.”

At the end of the quarter, Dick’s operated 732 Dick’s Sporting Goods stores in 47 states, 94 Golf Galaxy stores in 32 states, and 35 Field & Stream stores in 16 states.
Advertisement