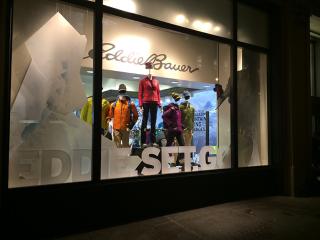 Golden Gate Capital has established a new operating company for two of its portfolio companies that it acquired out of bankruptcy.

The new PSEB Group is composed of Eddie Bauer and Pacific Sunwear of California, both of which will maintain their distinct brand opportunities. It will have a retail footprint of more than 700 stores and is on track for approximately $1.5 billion in combined total sales in 2018, including $400 million in ecommerce sales. Although earlier reports suggested that Golden Gate might merge the companies in an effort to consolidate stores, there was no talk of store closings in the announcement.

“By creating PSEB and investing additional equity, we will accelerate the growth trajectories for both businesses, while preserving the autonomy and discrete cultures of each brand,” said Josh Olshansky, managing director at Golden Gate Capital. “Both brands have made great progress in the past 24 months and have generated strong performance. Bringing these two brands onto a shared platform will allow us to fuel this momentum and unlock their next stages of growth.”

“We look forward to the competitive advantages that a unified shared services platform will provide us, while we continue to invest in the two brands’ consumer connections and distinct identities,” Egeck said.

Golden Gate bought PacSun out of bankruptcy in fall 2016. (In March 2017, CEO Gary Schoenfeld departed the chain, and James Gulmi, CFO of Genesco Inc. from 1996 to 2015, was named interim CEO.) Eddie Bauer was acquired by Golden Gate in 2009 at a bankruptcy auction.

The transaction is expected to close in the third quarter of 2018 and is subject to certain closing conditions.
Advertisement