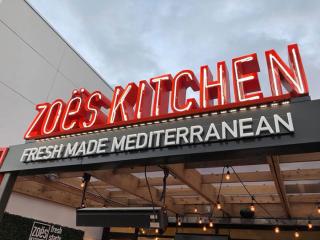 The fast-casual, 261-unit Zoës has entered into a definitive agreement to be acquired by privately held Cava Group, operators of the fast-growing Cava chain. The combined company will have 327 restaurants in 24 states throughout the U.S. The deal was valued at approximately $300 million.

Cava, which also sells its chef-crafted dips and spreads in more than 250 Whole Foods Markets nationwide, operates 66 restaurants. It expects to have 75 locations by the end of 2018.

The acquisition of Zoës Kitchen will be financed through a significant equity investment in Cava led by Act III Holdings, the financial group created by Ron Shaich, founder, chairman, and former CEO of Panera Bread. Shaich will serve as chairman of the combined company; Brett Schulman, current CEO of Cava, will serve as its chief executive.

“As a close observer of the fast-casual restaurant industry, I am thrilled at the prospect of what Cava and Zoës Kitchen can accomplish together,” said Shaich. “Together these businesses will create the leading company in one of the most important categories in fast casual today — Mediterranean — with the capabilities to drive extraordinary customer satisfaction and powerful growth.”

Zoes’ sales have been on the decline according to Restaurant Business, while Cava has been on the upswing since it was founded in 2011. The tech-savvy chain, which takes a data-driven approach to its operations, made Fast Company’s “The World’s Most Innovative Companies” list in 2018.
Advertisement