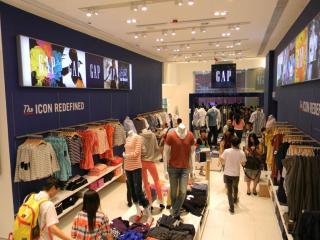 Gap Inc. is expanding its already robust franchise business with the addition of two brands.

The retailer announced it will begin franchising its Athleta and Janie & Jack brands internationally, starting with online and in shop-in-shop formats. Gap Inc. said it will eventually open brick-and-mortar stores with proven partners.

The announcement comes as Gap Inc. is finalizing plans to split into two publicly traded companies, with one devoted to Old Navy and the other to Gap, Banana Republic, Athleta, Intermix, Hill City and Janie and Jack.

“Introducing Athleta and Janie & Jack is a monumental milestone in our history and an opportunity to share more of our iconic brands with a broader, global customer base,” said Roy Hunt, the senior VP of Gap Inc. global franchise & strategic alliances. “Given the premium, gift-worthy children’s looks of Janie & Jack and the versatile, sustainable women’s performance apparel of Athleta, we feel the two brands will resonate with customers in new and existing markets internationally.”

The retailer will franchise the two brands through its global franchise and strategic alliances division, which opened the first Gap franchised store in 2006, in Singapore. In the last three years, Gap Inc. has opened 100 new franchise locations. Currently, there are more than 500-operated franchised Gap, Banana Republic and Old Navy stores around the world, as well as 35 e-commerce sites. (All U.S. stores are company-owned.)

Earlier this year, the company announced a partnership with AR Retail S.A., a member of Grupo Promerica, to open 45 Gap, Banana Republic and Old Navy stores in Central America and the Caribbean during the course of the next eight years.

The introduction of the new brands builds on the success of the franchise business.
Advertisement