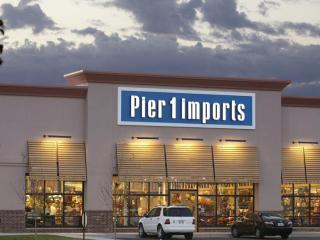 Net sales fell 15.5% to $314 million due to lower average customer spend, which the retailer attributed mainly to changes in its merchandise mix and decreased store traffic.

Pier 1 ended the quarter with 967 stores, down 30 from the year-ago period. The retailer said it is looking to close some 57 locations in its current fiscal year, higher than the chain’s previous estimate of 45, which it gave back in April. At that time, Pier 1 also said it also has conducted a review of its store portfolio and would be seeking occupancy cost reductions.

"We are in active discussions with our landlords," said Cheryl Bachelder, interim CEO, on the company's quarterly earnings call. "Where we have not seen landlord participation, we have begun our store closing program as we said we would." (Bachelder was tapped for the position after the sudden departure of CEO Alasdair James in December.)

In the company’s earnings statement, Bachelder sounded a positive note, saying that the retailer was focused on its fiscal 2020 action plan, which is designed to reset its operating model and turnaround its business for future growth.

“We believe Pier 1 has strong brand equity and a loyal customer who will return for the right style stories in our assortment,” she said. “As we expected, our sales and margins remained under pressure in the first quarter and we anticipate this will continue through the second quarter. This reflects our decision to take aggressive clearance actions to move through lower-priced, lower-margin goods and ensure we provide our customers with a strong, on-brand style statement for fall.”

Pier 1 is implementing an action plan designed to drive benefits in fiscal 2020 (its current fiscal year) of approximately $100-$110 million by resetting its gross margin and cost structure. Approximately one-third of the benefits are expected to be realized in gross margin, with the remaining two-thirds coming from cost reduction. After reinvesting in the business, the company believes it will be positioned to recapture approximately $30-$40 million of net income and $45 million-$55 million of EBITDA in fiscal 2020 (its current fiscal year).

“We have chosen to prioritize our comp sales recovery with the implementation of new merchandising and marketing initiatives supported by substantive cost-cutting actions, Bachelder said. “Importantly, we remain on track to achieve the previously outlined benefits of $100-$110 million this year and now expect the substantial majority of those benefits to be realized through cost reductions. The expense savings we plan to realize in the second half of fiscal 2020 are expected to be absorbed by reduced gross margins rather than driving the full year net income and EBITDA recapture we previously outlined.”
Advertisement