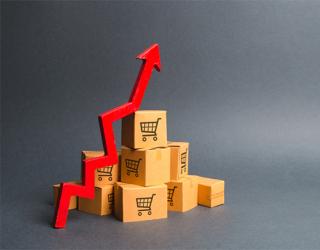 Inflation rose in May, with prices rising 8.6% from a year ago.

Consumers didn’t get a break in May from rising prices, particularly in two categories.

The total consumer price index (CPI) rose 1% in May following a 0.3% increase in April, with food, gasoline and sheltar costs among the largest contributors, according to the latest report from the U.S. Bureau of Labor Statistics.  The index is up 8.6% year-over-year.

Inflation is taking a major toll on consumer sentiment. According to the University of Michigan’s preliminary gauge of consumer sentiment for June plunged 14% to a record-low reading of 50.2, down from 58.4 in May.

The food index rose 1.2%, following a 0.9% increase in April, bringing the year-over-year gain to 10.1%. All six main grocery categories had higher prices in May, according to the data.  The CPI for eggs rose 5%, while dairy product prices were up 2.9%, nonalcoholic beverages rose 1.7% and cereals and bakery were up 1.5.%.

Gasoline prices also saw a big increase  during May. The CPI for gasoline rose 4.1% for the month after declining in April. It is up 48.7% year-over-year.

The index for food away-from-home rose 7.4% over the last year, the largest 12-month change since the period ending November 1981.

The index for all items except food and energy inched up 0.6% in May, the same increase as in April. The index rose 6% over the last 12 months, with the increase broad-based, reflecting advances in almost all major component indexes.

The index for household furnishings and operations continued to rise in May, increasing 0.4% over the previous month. The index for apparel increased 0.7% in May after falling in April.

With inflation up again in May,  speculation is rising that the Federal Reserve is set  raise interest rates to slow growth and bring down prices.

Meanwhile, the National Retail Federation is turning up the heat on the Biden administration to repeal tariffs on goods from China as a way to reduce inflation, launching  the second phase of a major advocacy campaign with broadcast, digital and out-of-home advertising.