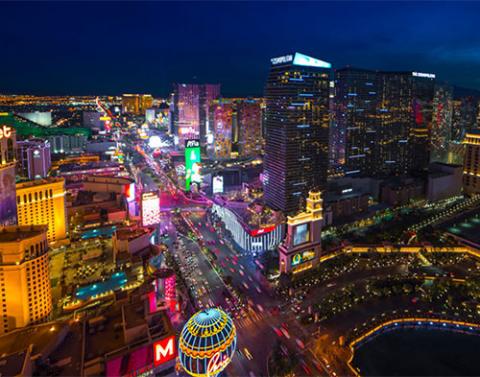 Las Vegas posted the nation's largest decrease in retail vacancy rate over the past year, according to JLL.

The country's retail recovery is on the fast track.

Retail rents are rising with strip centers and neighborhood centers posting the biggest increases, Class C malls are suffering with average vacancy rates topping 12%, and retailers are expanding to markets where the most people are going, places like Las Vegas, Orlando, and Atlanta. Those are the highlights of JLL’s “Retail Recovery” report, which was released as the ICSC’s big RECon show—canceled last May—opened this week in Las Vegas. Booths were fewer and smaller at RECon and attendance was less than a third of the usual 30,000, but leasing activity has been stronger than it’s been in years.

“Recovery has gone faster than anyone imagined. Brokers are busy. The transactional increase is massive, up 75%,” said Naveen Jaggi, president of JLL’s retail advisory services, from the show floor. “Where are retailers expanding? To where the population growth is, and where the strongest retailers are opening new stores. They’re seeing where Hobby Lobby, Home Depot, and Target are opening and then following them.”

All retail sectors won increased rents from new tenants over that time span, with space in strip centers and neighborhood centers going up by 3%. Rents rose 2.4% at power centers, 1.6% at general and freestanding retail, and 1.3% at malls.

2020’s huge surge in online shopping also receded. E-commerce’s share of total market sales hit a high point of 15.7% during last year’s second quarter, but ratcheted down to 13.3% a year later. Still, that’s a significant increase over its pre-COVID share in the 11% range.

“We had eight years of consecutive growth up to 2019, but we needed to slow down,” Jaggi said. “Bad retailers needed to go away. As a result, retail is healthier today than it was before the pandemic. We don’t see center operators going away, but bad properties are going away.”