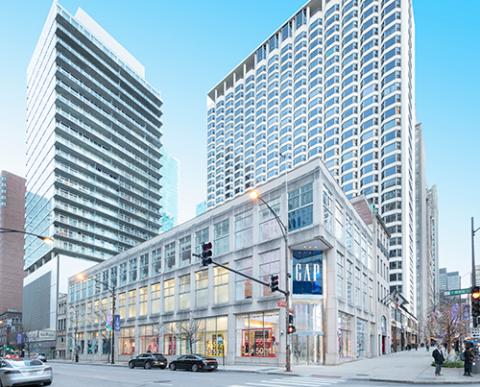 This former Gap location will soon be Aritzia's Chicago flagship.

A new tenant will be moving into a space formerly occupied by Gap.

The largest retail lease transaction executed in nearly a decade on Chicago’s Magnificent Mile, according to CBRE, is a new 46,000-sq.-ft. location for Aritzia.  It will be the Canadian fashion retailer's  fourth location in the Chicago area.

“This is an important deal for the Mag Mile, and Chicago in general,” said CBRE’s Luke Molloy, who represented the owner of the site, 555 North Michigan Avenue, in the deal. “Aritzia is one of the most sought-after brands in the world and they believe in the future of North Michigan Avenue.”

“Aritzia secured the best real estate in the market for their largest store in the fleet and made another long-term commitment to Chicago,” Molloy said. “What they have planned for their new flagship is incredible. We expect this to be one of many new deals that will return the Magnificent Mile to prominence.”

According to a recent CBRE report, shoppers across the U.S continued to make more in-store purchases. Core retail and food services sales grew by 11.5% year-over-year in Q1 to $1.4 trillion, outpacing e-commerce sales that rose 10.2% in the period to $287 billion.