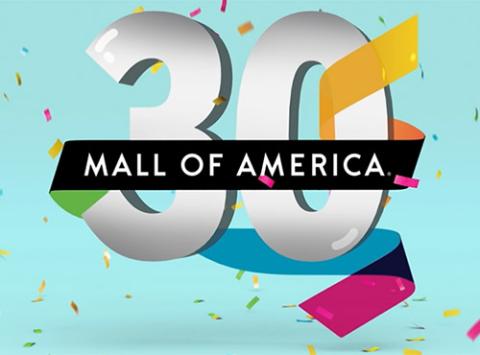 The Ghermezian family's big and bold demonstration of retail and entertainment is about to enter its fourth decade.

In 1992, Bill Clinton was elected President. Speed skater Bonnie Blair became the United States’ most decorated female Olympian at the Albertville Games. “The Silence of the Lambs” won the Academy Award for Best Picture.

And the biggest retail center ever built in the U.S. opened in Bloomington, Minn.

The Ghermezian family’s indelible mark on retail real estate in America was made on the former site of Metropolitan Stadium, where both the Vikings and the Twins played their home games. One seat from that ballpark still resides inside MOA, marking the spot where the Twin’s Harmon Killebrew deposited a 520-foot home run in 1967.

But it is the 520 stores and the 5.4 million sq. ft. of floor space planted there by Triple Five Group that has since made history at the site.

"As we celebrate Mall of America's 30th birthday, we're also celebrating the many people, businesses and organizations who have helped make it an iconic destination," said Jill Renslow, the executive VP of the massive property who has been a part of its for half of its 30-year life span. "Since Day One, Mall of America has exceeded expectations, and we're excited to continue doing just that for years to come."

The Ghermezians introduced to America the experiential retail experience they had pioneered at Canada’s West Edmonton Mall in Canada, where they ratcheted up mall carousels a theme park and the Sea Life Caverns.

Mall of America, too, has a Sea Life Aquarium—as well as a Nickelodeon Universe theme park, a Crayola Experience, and a Flyover America flight simulator.  It’s estimated that more than 1.3 billion people have visited MOA over the past three decades. Some 40 million enter its doors every year.

More than 10,000 events have been held at the big mall since its inception, including star turns by The Beach Boys, Ringo Starr, and Mariah Carey. But it will be an educational event that marks its birthday.

Mall of America has partnered with The National Center for Autonomous Technologies (NCAT), the National Science Foundation (NSF), Northland Community and Technical College, and the colleges and universities of Minnesota State to present Experience STEAM, an interactive indoor and outdoor mall-wide event that aims to inspire youth by showcasing a variety of STEAM (Science, Technology, Engineering, Arts, Mathematics) careers on Aug. 10 through 14.

"We are honored to be the host site for Experience STEAM," said Renslow. "From challenging the very definition of what a mall can be to offering thousands of creative and technical careers, we're excited to showcase our innovation in action for the next generation."

Throughout the year, MOA will be awarding visitors “Mystery Gifts” and prize packages.