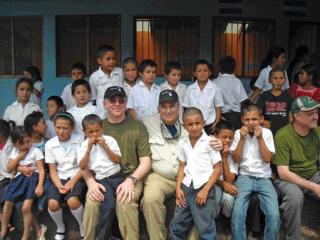 When the Retail Orphan Initiative (RetailROI) was launched three years ago, its goal was to raise awareness of — and develop solutions for — orphans and other vulnerable children around the globe. Fast forward to 2011, and the charitable foundation, which is made up of IT-focused retail executives, consultants and vendors, remains laser-focused on its mission. Leveraging the power and influence of retailers, RetailROI is changing for the better the lives of vulnerable children globally.

The program evolved during an informal meeting between the late Paul Singer, then senior VP and CIO of Supervalu, and Greg Buzek, founder and president, IHL Group. Singer shared his longtime work as an adoption advocate, while Buzek talked about his work to support orphan care. Their discussions and shared interests gave birth to RetailROI.

Today, operating under the umbrella of The Giving Back Fund, and with the support of the retail industry, the organization provides grants to charities that provide hands-on efforts across a wide range of areas. These include orphan care (food, shelter, medical, clothing, education), child rescue from human trafficking, and life skills training for orphaned and vulnerable children.

“We laid the groundwork, and RetailROI continues to raise awareness for the 400 million vulnerable children worldwide,” said Buzek, who is the organization’s donor trustee. “In addition to raising funding for these children, we are also leveraging the core strengths of our members to aid adoption and foster-friendly environments.”

The group has raised just shy of $500,000 since its inception, and the members’ advocacy has become much more “hands-on.” Last winter, for example, a team of retailers and analysts that support RetailROI made two trips to Honduras in partnership with Lifesong for Orphans to help outfit and install a computer lab for a school of 500 children, more than half of which are orphans.

“This lab was funded by companies at the NRF Show, partnering with RetailROI, to drive traffic to their booths during the show,” Buzek explained. “They made a donation for every tour, visit, badge scan. That paid for 59 computers for the lab when combined with donations of software from Microsoft.”

Honduras is just the latest example of the group’s efforts. A $5,000 grant, from a single sponsorship to the group’s SuperSaturday (see page 28) event, was used to help fund a border monitoring station between Nepal and India.

“Because of that grant, 72 young girls were rescued out of human trafficking in one year, and six adults have been put in jail for 25 years,” Buzek said.

At press time, Buzek was getting ready to leave for Marshall, Liberia, where RetailROI helped build a school in a community that had not had one for more than 14 years. The current student body is 60 children, a group that will soon expand to 84 kids.

“Our trip will help us determine how else RetailROI can help,” Buzek said. “By allowing members to go on these trips, they are coming face-to-face with the kids, and are changing the world in ways they never imagined,” he said.

Other projects on the agenda for 2012 include:

“It gives members the chance to discuss IT, sales, marketing and other skill sets and areas of interest,” > Buzek explained. “These kids are hungry for knowledge, and the more they learn about different careers, the more they see a ticket out of poverty.”

• Establishing more “Safe Families” programs in the United States. With the help of grants, these programs offer sanctuary for children of parents in financial, domestic or health crisis.

“It is estimated that these programs will save 50% of children from going into foster care during a family crisis,” Buzek said. “It builds a safety net around the family and children, so the family can stay together and out of ‘the system,’ at the taxpayer’s expense. About one-third of our funds have been donated to expanding this domestic program.”

RAISING THE BAR: RetailROI’s charitable efforts are made possible and sustained by the involvement of retailers, technology partners and analysts alike. The group is always on the lookout for innovative ways to boost donations and participation.

In May 2011, in collaboration with IBM, it launched a national campaign designed to make it easy for retailers to raise money for charities at the point of sale. And in July, it launched an online charity “locator” to match up retail chains looking to donate overstocked merchandise with local charities, giving retailers the opportunity to receive a potential tax deduction for items that were not going to be selling at a profit.

“There are $65 billion worth of overstocks industry-wide,” Buzek reported. “Chains that mark down merchandise are eroding profit, and if they sell overstocks to liquidators, they can suffer a tremendous loss. RetailROI has a database of charities in key locales where retailers can donate this merchandise to kids in distress, which benefits the children and the retailer.”

RetailROI is eager for more members of the industry to get involved, even if just to help spread the word. Buzek continues to work to expand RetailROI, and his efforts have not gone unnoticed. In October, he was honored by the Congressional Coalition on Adoption Institute with the first annual Paul Singer Award.

Buzek received the award, designed to recognize business and governmental leaders who have gone above and beyond their corporate roles to advocate for better adoption and foster care policies worldwide, at the 13th annual Angels in Adoption Congressional gala in Washington, D.C.

“It was a great honor,” Buzek said, “and I was humbled to be named in the same sentence with Paul. We’ve accomplished a lot in three years. I hope this opens doors to other things and helps us make an even bigger difference.”

Going forward, RetailROI will be providing a lot more opportunities for folks in the industry to make a difference.

“It could be teaching marketing or sales, sharing a career path, donating expertise to impact a child — anything that helps show them a path that is different than the poverty they have seen to date,” Buzek said. “Most of these children suffer not only from lack of parents, but a lack of hope or vision.”

To find out more about RetailROI and how you can get involved, visit retailroi.org/.