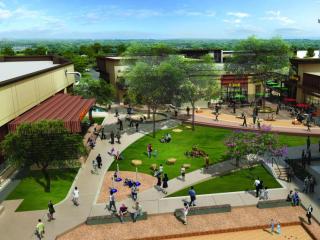 Consumers in the Columbus, Ohio, market will soon have a new option for shopping, dining, working, playing and living.

Slated for a 2017 groundbreaking, Hamilton Quarter actually encompasses 320 acres of land at the State Route 161 and Hamilton Road interchange. Although the project is new, the idea behind it has been under consideration for a while.

“CASTO has owned a majority of the land for more than 30 years,” said Freeman. “The real catalyst has been the city of Columbus enhancing the infrastructure.”

Columbus is committing about $20 million to improve the supporting infrastructure for the development. Most importantly, the city is facilitating improvements to the existing roadway infrastructure.

“The Hamilton Road intersection is a failing intersection,” said Freeman. “It’s a key intersection with two lanes. An ‘S-curve’ extension will create a four-lane thoroughfare that will enable a large increase in vehicle traffic and great access.”

In addition to serving consumers in Columbus, the property is also contiguous with an ultra-luxury development in neighboring New Albany, Ohio, and is also near the high-growth areas of Westerville and Gahanna, Ohio.

“We are located in the prime Columbus growth corridor,” said Freeman. “Hamilton Quarter has great demographics.”

The figures back up Freeman’s assertion. The five-mile Hamilton Quarter trade area has 58,000 households with an average household income of more than $94,000. Close to half those households earn more than $75,000. Currently, 141,000 people live in the trade area, with a daytime population of close to 151,000 and a projected total population of more than 150,000 by 2020. Total retail expenditure is almost $1.8 billion.

Although CASTO is currently in active negotiations with a number of major retail store tenants for Hamilton Quarter, one well-known chain is placing its headquarters on the property. Columbus’ own Big Lots Inc. recently announced it is moving its corporate headquarters to a 25-acre parcel in the development.

The headquarters site will include a 300,000-sq.-ft. office building and house 800 employees. Construction may begin by the end of the year with a targeted 2018 opening.

The planned Big Lots headquarters reflects how diverse the tenant mix and offerings at Hamilton Quarter will be. In addition to

1 million planned sq. ft. of retail, restaurant and entertainment space, it will also feature more than 700,000 sq. ft. of office and hotel space. And a built-in population of shoppers, diners and workers will be ensured by the inclusion of 800 multi-family units and 130 senior-living units.

The first two phases of Hamilton Quarter will encompass 250,000 sq. ft. to 350,000 sq. ft. of space, including retail stores and the Big Lots Campus on the north side of the development. Casto said his company, as well as development partners The Daimler Group and The New Albany Co., have had an overwhelmingly positive experience creating the project with the city of Columbus.

“We have had a positive partnership with the city of Columbus and had their support throughout the entire development process,” said Casto. “There was no significant opposition. During the zoning process, we moved some pieces of the puzzle around.”