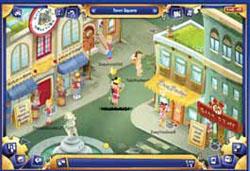 Since Build-A-Bear Workshop’s inception, its mission has been to bring entertainment back to retail. More than 10 years later, the company is merging this mind-set with the social-networking trend. As a result, Build-A-Bear Workshop is providing its young shoppers with a safe community to play in with peers and express their creativity.

This year marks Build-A-Bear Workshop’s 11th anniversary, and the company has plenty to be proud of. Besides being considered the 10th largest toy store in the United States, the chain operates more than 370 locations. The chain also generated $474.4 million in sales for its fiscal year 2007.

Build-A-Bear Workshop was the brainchild of founder and “chief executive bear” Maxine Clark, but she credits the chain’s successful business plan to her godchild Katie. More than a decade ago, Clark and Katie, like many people, were caught up in the Beanie Baby craze.

“The two talked about how it would be ‘cool’ to build your own Beanie Babies, and a business plan emerged,” Dave Finnegan, the chain’s CIO (or chief “inbearmation” officer as he is known throughout the company) said during the Technology & Operations Store Summit (TOPSS), held in Las Vegas in June. Chain Store Age and Retail Technology Quarterly sponsored the event.

That business plan morphed into one store which opened in St. Louis. Today, the chain is a household name. Based on an interactive experience that allows shoppers to create their own stuffed animals and friends, Build-A-Bear Workshop’s guests have created more than 60 million stuffed animals to date.

“While our core demographic is female tweens, the stores appeal to a wide range of guests,” Finnegan explained during the session, “Extending the Store Experience Online.” “But at the core of our chain is the children. Kids are the master of their destiny in this space, and that is what inspires us.”

In fact, it is their passion that has prompted the company to explore new opportunities beyond the store’s four walls and into cyberspace. More specifically, Build-A-Bear Workshop is exploiting the power of virtual communities.

Build-A-Bear Workshop has created a reputation on customization. But by watching the power of other brands, including Apple, Webkinz and MySpace, that have taken customization online, the company was able to stake its own claim within this new genre.

Called BuildaBearville.com , the virtual world is more than an extension of the Build-A-Bear Workshop brand. The chain has found a way to merge its physical brand online and create a safe haven where its young loyal shoppers can play, create and stay connected with the brand.

As Build-A-Bear Workshop guests create their furry friends at store level, they receive a “birth certificate” announcing their newly built animal. Within 20 minutes of receiving that birth certificate, the animal’s owner can enter an exclusive community at BuildaBearville.com .

Each birth certificate has a code exclusive to each animal. Once users enter this code at BuildaBearville.com , they can choose an anime-style avatar to represent themselves, and they watch their new friend come to life. They are also presented with $2,000 in Bear Bills and a virtual backpack the avatar can use to carry their animal throughout the virtual town.

BuildaBearville.com citizens are encouraged to participate in games to earn Bear Bills, which they can use to buy clothing and furniture for their virtual Cub Condo home. They can also trade items they have created or acquired with other citizens playing in the virtual world.

BuildaBearville.com , while based on fun, teaches visitors a new lesson each week, and it rewards them for accomplishing these activities. “And they can use these points and rewards to make purchases in various places across the virtual world,” Finnegan explained.

For example, during the week of Cinco de Mayo, the company distributed 100,000 virtual sombreros, and during a focus on fitness one month, avatars received sneakers and headbands.

“Since these prizes are limited, it really opens up conversation between kids online,” he explained. “They always want to know how they got an item, and then they connect with us directly to try and earn their own.”

This customer demographic is only primed to expand—a blessing for the Build-A-Bear Workshop brand as it continues to attract new shoppers. For example, 15.4 million Internet users are between the ages of 3 and 11 years old, Finnegan revealed during the session.

“This shows that the Internet is here to stay,” he said. “We see more kids online, and this demographic is more techsavvy than ever before.”

Thankfully for Build-A-Bear Workshop, many of these kids have found their way to BuildaBearville.com . Since the site launched last December, the community has become “home” to more than 3.5 million characters.

The average visitor is between 8 and 9 years old, “and approximately 85% of our visitors are girls,” Finnegan added. “We think this is because girls tend to be more social and they use the medium to interact with other children, mostly girls.”

By analyzing the way kids communicate and play on the site, the company is creating new ideas to engage them virtually. “One day we noticed that kids put their avatars in the coffee shop and pretended they were baristas,” he said. “They were asking other citizens what they would like and attempted to serve them. We are empowering them to be creative.”

The chain is also working to merge its physical and virtual experiences. As shoppers make a purchase in-store, they receive an exclusive code on their point-of-sale receipt. “These codes give them exclusive access to boutiques online where they can buy clothing for their animal or avatar,” he explained.

Seventy-five percent of these codes are linked back to members of Build-A-Bear Workshop’s Stuff Fur Stuff loyalty program. As loyalty cardholders accrue points during their in-store visits, moms can give these points to their kids to spend online. “This also puts more opportunity into the hands of kids,” he said.

Build-A-Bear Workshop is also working on further leveraging the virtual experience within physical locations. For example, Build-A-Bear Workshop recently teamed up with Milk Rocks!, a division of nonprofit Milk Media, which is dedicated to educating children on the benefits of drinking milk. Approximately 120 million milk cartons distributed among 95,000 elementary schools promoted the new BuildaBearville.com community.

“Each carton had a code. If the kids brought their empty carton home, they could input the code online and get a free virtual carton of milk for their avatar,” he explained. “We tried to build a promotion among the virtual-world population and see if it would translate to the physical world and it worked.”

The success of this promotion set the stage for what is possible in the near future. “We are preparing a campaign that will enable virtual citizens to earn a coupon online that can be redeemed in-store for actual merchandise,” Finnegan said. “We are unsure what the items will be, but we are deciding the best way to help make the transition to reward online guests in-store.”