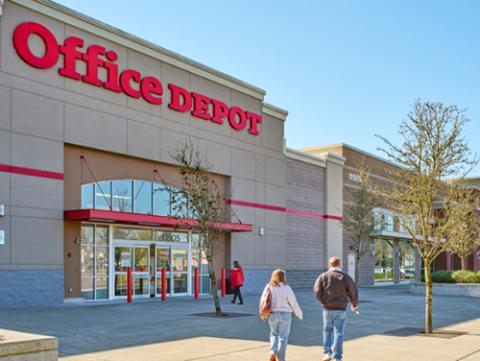 There is a new twist in Staples’ years-long effort to take over rival Office Depot.

ODP Corp., whose banners include Office Depot, OfficeMax and CompuCom, turned down a takeover bid from Staples. The offer, which was made last week, was for $2.1 billion, or $40 a share. However, ODP opened the door to a different deal.

“The Board has unanimously concluded that there is a more compelling path forward to create value for ODP and its shareholders than the potential transaction described in your proposal,” Joseph S. Vassalluzzo, chairman of ODP, wrote in a letter to Stefan Kaluzny, managing director of Sycamore Partners and a board member of USR Parent Inc., the Sycamore-affiliated owner of Staples.

In the letter, Vassalluzzo said the company was open to a different deal rather than a full takeover, with one option being selling ODP’s retail and consumer-facing e-commerce operations to Staples, or a joint venture, “which we believe is a viable path toward maximizing synergies and efficiencies for both companies that we would expect to result from such a transaction, and which would equally share the risks and benefits between our companies.”

He noted that a deal that is not a full takeover “could be executed more efficiently and with far greater certainty and less regulatory risk than your proposal.” Vassalluzzo said ODP does not plan to "engage in a transaction that, as history has shown, would likely result in a prolonged and expensive regulatory review process with no guarantee of success."

The chairman also noted that ODP is proceeding ahead with its plan to sell CompuCom.

In 2016, Staples and Office Depot called off their merger after a federal judge issued an injunction temporarily blocking the $6.3 billion deal over antitrust concerns.

Staples previously tried to acquire Office Depot in 1996. But the deal was called off after regulators raised antitrust concerns.