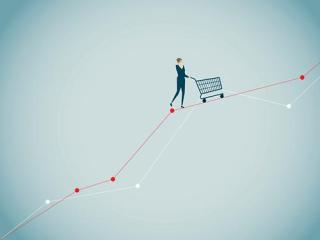 Grocery inflation continues to rise, particularly in the e-commerce channel.

According to monthly inflation insights from Numerator, overall, grocery prices continued to climb in April 2022, particularly online and in dollar stores. For the four-week period ending May 1, 2022, grocery prices were up 12.4% compared to the year-earlier period, a rate that has steadily increased from approximately +7-8% at the beginning of the year.

Household items inflation climbed back toward February 2022 peaks. Prices for household items were up 13.8% from the year-earlier period, a rate that is up from prior weeks but down slightly from its highest point (+14.4%) in mid-February.

Consumers across rural, urban and suburban markets are now similarly impacted. Suburban consumers were paying more for grocery items for most of 2022, but the gap narrowed recently, with suburban, urban and rural consumers experiencing similar rates of inflation (+12.6%, +12.3%, +12.3%, respectively).

Percent changes in Numerator's Price Pulse are calculated at a category level. The average price per item within a category is based on verified purchase data from over 100,000 Numerator panelists, and the average price from the past four weeks is compared to the same period one year ago. The Price Pulse includes a cross-channel view of prices, as well as channel-specific views and cuts by consumer demographic groups. Numerator’s Financial Outlook Tracker leverages an ongoing survey that collects approximately 10,000 responses from active shoppers each week. Consumers are asked to rate their current financial situation in addition to sharing spending intentions. The tracker has additional breakouts by ethnicity, generation, income level, and urbanicity.