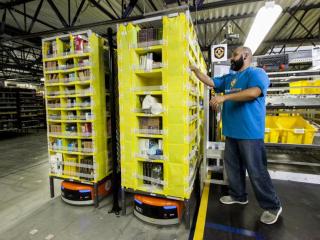 Amazon has made a move fueled by economic imperatives and political pressure, including withering criticism from Sen. Bernie Sanders.

The online giant announced that it will increase its minimum wage to $15 for all full-time, part-time, temporary (including those hired by agencies), and seasonal employees across the United States. The wage hike, which goes into effect on Nov. 1, will benefit more than 250,000 existing Amazon employees, and more than 100,000 seasonal employees that the company plans to hire for the holiday season.

“We listened to our critics, thought hard about what we wanted to do, and decided we want to lead,” said Jeff Bezos, Amazon founder and CEO. “We’re excited about this change and encourage our competitors and other large employers to join us.”

Amazon is so bullish on the plan that its public policy team will begin advocating for an increase in the federal minimum wage. The rate has been stuck at $7.25 for nearly a decade.

“We will be working to gain Congressional support for an increase in the federal minimum wage,” said Jay Carney, senior VP of Amazon Global Corporate Affairs. “We intend to advocate for a minimum wage increase that will have a profound impact on the lives of tens of millions of people and families across this country.”

Amazon’s wage hike follows heavy criticism from labor rights groups, and also from Sen. Bernie Sanders, over pay and working conditions at its warehouses. The progressive icon posted a series of Facebook videos calling out Amazon for not paying a living wage, which he describes in some posts as $15 an hour. In one video, titled “Get Amazon Off of Corporate Welfare,” he highlighted that CEO Jeff Bezos is the world’s richest person and earns $260 million a day, but many of his workers are on food stamps.

In response to Amazon’s wage hike announcement, Sanders stated he wanted to “give credit where credit it due. And I want to congratulate Mr. Bezos for doing exactly the right thing.”

"What Mr. Bezos has done today is not only enormously important for Amazon's hundreds of thousands of employees, it could well be, and I think it will be, a shot heard around the world,” he said.

Analyst Neil Saunders, managing director of GlobalData Retail, said that while Amazon’s wage hike was politically savvy, it was driven by economic imperatives.

“Amazon's superior growth necessitates a lot of recruitment which is becoming increasingly difficult in a tight labor market,” he commented. “This is especially so over the holiday season. Without a rise in wages, Amazon would be placing itself at a disadvantage in the labor market.” (Click here for more commentary)

Amazon’s U.S. employees are not the only ones who will benefit from the wage increases. The company will also boost its minimum wage to £10.50 (or $13.60 USD) for the London area and £9.50 ($12.60 USD) for the rest of the UK for all full-time, part-time, temporary (including those hired by agencies), and seasonal employees.
Advertisement