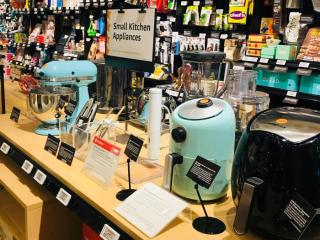 The store is located on Fourth Street in Berkeley, Calif., according to Berkleyside.

The format only sells items with a rating above four stars on Amazon, as well as new trending items and best-sellers. That said, the 4,000-sq.-ft. store features “thousands of items” ranging from kitchen cookware, home décor objects and books, to Amazon branded electronics such Amazon Fire tablets, TVs, Amazon Echo speakers, as well as other smart-home devices. It also features a table with products that are trending in Berkeley, as well as popular kids’ toys and stuff from people’s wish lists on Amazon.

The online giant introduced the concept in September, in Manhattan’s SoHo neighborhood. A second location opened in Lone Tree, Col., in early November.