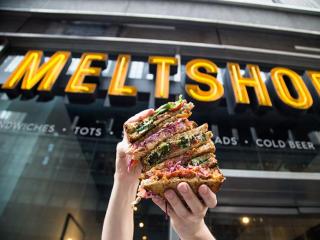 Melt Shop is expanding its footprint in the Northeast — and the Middle East.

The company, which describes itself as a pioneer of the melted sandwich movement, has signed three franchise agreements to develop 26 locations in Pennsylvania, New Jersey, Delaware, Staten Island, and the Middle East. To date, Melt Shop has nine locations open, with plans to grow to 100 locations over the next five years.

“We could not be more thrilled with the level of excitement and interest from prospective franchisees so soon after launching our franchise program. We're looking forward to continuing this momentum in 2018 and recruiting even more qualified partners to join the brand,” said Spencer Rubin, founder and CEO Melt Shop.

Founded by Rubin in 2011, Melt Shop began franchising in 2017 after opening eight corporate locations throughout New York, Philadelphia, and Minneapolis. The company signed a multi-unit deal to open seven restaurants in the Middle East, four of which will open by the second quarter of 2018. Several domestic locations will open in 2018, including in Delaware and Staten Island Mall in Staten Island, New York.
Advertisement