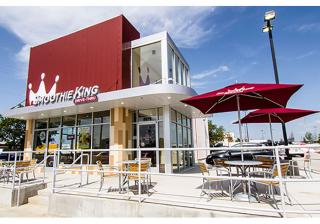 Smoothie King shows no signs of losing its momentum.

The company, which operates nearly 1,000 locations worldwide, has inked a deal with a franchise partner that will bring the brand into new markets. John Clancy and his team at Smoothie King Midwest signed an agreement to develop 60 locations in Ohio, Kentucky, Indiana and central Florida, starting in Indianapolis and Palm Beach County, Florida.

Clancy, a longtime Planet Fitness franchisee with a strong background in real estate and finance, has an aggressive growth plan for the brand. He and a partner opened three Smoothie King locations in Connecticut, New York and Florida in the past year under a separate development agreement.

In addition to its signature blended juice beverages, Smoothie King also sells sports beverages, energy bars, vitamins, supplements and more. The fastest-growing chain in its category, the company expects to open 150 new locations in 2018, the most it has ever opened in the U.S. in a single year.
Advertisement