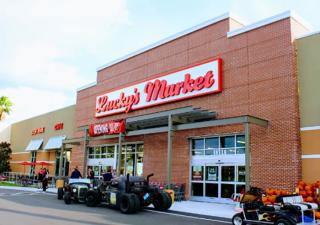 Kroger is getting in on the action in the Sunshine State, where competitor Publix Super Markets reigns supreme.

Topvalco, Inc., a wholly-owned subsidiary of The Kroger Co., has purchased a 73,841-sq.-ft. shopping center in Delray Beach, Florida, for $15 million, reported The Palm Beach Post. The retailer also paid $2 million for an outparcel that includes a bank.

The Delray Commons shopping center property will reportedly be the future location of Lucky’s Market, a value-priced natural and organic foods grocery chain backed by Kroger. The new 29,000-sq.-ft. Lucky's is expected to open in 2019, according to the Palm Beach Post report.

Lucky's expects its store count to total more than 35 stores by the end of 2018. It recently signed four new leases for stores in Florida, all of which are expected to open in the next 18 to 24 months.
Advertisement