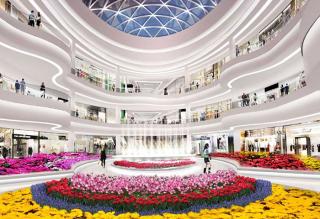 The waiting may finally be over.

American Dream, the 3 million-sq.-ft. retail and entertainment destination located next to Met Life Stadium in East Rutherford, N.J., announced it will open on Friday, October 25, 2019. It is the first time the developer — Triple Five Group — has set a specific date for the opening. In May, it announced a “fall” opening and back in March, it had announced a “late summer’ opening.

Entertainment will weigh heavily in the mix at American Dream, whose mix is broken down as 55% entertainment and 45% “experiential” retail. It will feature more than 100 dining and specialty food offerings, including over 20 full‐service restaurants, a Coca‐Cola “Eats” Food Hall and a Kosher Food Hall. The company did not give any details about which retailers will be opening their doors in October, saying only it will provide “further insights to the property, its attractions, tenants and the exciting plans and events surrounding the opening and beyond” in the coming weeks.

Most recently, Coca-Cola Company and Liberty Coca-Cola beverages — the bottler for northern Jersey — inked a 10-year partnership with American Dream. Aside from being the official soft drink supplier at the property, Coca-Cola will host events featuring celebrity spokespeople, host a social media storefront, and operate Coca-Cola Eats, an 800-seat restaurant serving dishes and Coca-Cola products from across the globe.

“We know that the community has been eagerly awaiting the launch of this incredible global destination,” said Don Ghermezian, president of American Dream. “We have a one‐of‐a‐kind property that will reshape the way people think about entertainment, theme parks and shopping and we are so excited to reveal our incredible Nickelodeon Theme Park, DreamWorks Water Park and Big SNOW Ski and Snowboard Park.”

Ground was broken on American Dream (then called Xandu) in 2005, by The Mills Corp. But the developer filed for Chapter 11 bankruptcy protection. The project’s second developer was Colony Capital, which signed on in 2006 and exited in 2010. In 2011, the project was taken over by Triple Five, which owns and manages West Edmonton Mall in Alberta, Canada, and Mall of America in Bloomington, Minn. Triple Five set out to completely overhaul the property, which was renamed American Dream.
Advertisement