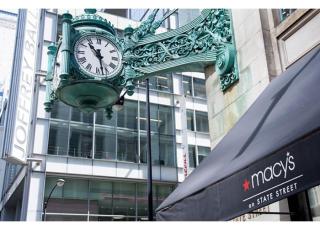 An upbeat Macy’s on Tuesday posted earnings and same-store sales for the fourth quarter that topped expectations as it reaped the benefits of a more disciplined promotional strategy, innovative investments in its updated loyalty program, digital momentum, and the ongoing sale of its real estate assets, whose 2017 sales totaled $411 million. It also issued an upbeat outlook.

The department store retailer announced that it had signed an agreement to sell seven “largely unused” floors of its State Street store in Chicago to Brookfield Asset Management, for a total of $30 million, with $27 million of consideration and a $3 million contribution for certain improvements. The floors will be converted into office space. Macy’s said the sale will enable it to make the State Street store a “more vibrant” shopping destination. (See end of article for more information on Macy’s real estate review.)

“We are committed to returning Macy’s, Inc. to comparable sales growth in 2018 and will build on the momentum we created in the fourth quarter of 2017,” said Jeff Gennette, Macy’s chairman and CEO. “We are encouraged to see a trend improvement in our brick & mortar business, and we had the 34th consecutive quarter of double-digit growth in our digital business.”

Gennette said that Macy’s was “disciplined” with its promotional cadence and maintained a good inventory position in the fourth quarter.

“We head into 2018 with an improved base business, healthy inventories, a focused and engaged organization and a clear path to return Macy’s to growth,” he said.

The company said in 2018 it will accelerate initiatives related to its stores, technology and merchandising. It also introducing an incentive plan for store employees.

Looking to fiscal 2018, Macy's expects earnings for the year to fall within the range of $3.55 to $3.75 per share, while analysts had forecast the company earning $3.04 a share.

Real Estate Update: Over the last three fiscal years, Macy's, has completed asset sale transactions, including stores, warehouses and parking garages, totaling approximately $1.3 billion in cash proceeds. The retailer said it will continue to “opportunistically evaluate” its real estate portfolio in 2018 to identify opportunities “where the redevelopment value of its real estate exceeds that of non-strategic operating locations.” The company also continues to focus on creating “additional value’ from its flagship locations.

Macy’s announced it is exploring opportunities to sell the approximately 240,000 gross-sq.-ft. I. Magnin portion of its main Union Square building in San Francisco. (Macy’s Union Square comprises multiple buildings, and the former I. Magnin building is a separate structure.)

As previously announced, Macy’s sold the Union Square Men’s building and is incorporating the men's business into the main store. The company is also making additional enhancements to the Union Square main building through the conversion of street-level selling space into high-end retail shops that will be leased to third parties.

Macy’s will continue to work with Brookfield as part of its strategic alliance. The companies have agreed to certain terms on nine assets (of the approximately 50-asset portfolio), which Brookfield will redevelop once it has received the necessary approvals. Upon the completion of certain approvals, Macy’s will either sell its interests in the individual assets to Brookfield or contribute them to individual joint ventures. If sold, the cumulative value is estimated to be approximately $50 million.

To date, Macy’s has closed 83 stores as part of its previously announced plan to shutter 100 locations.
Advertisement