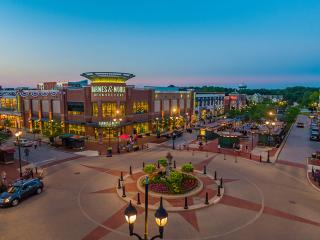 Earlier this year, real estate editor Al Urbanski set off on Interstate 71 from Cincinnati to Columbus to Cleveland in search of the greatest retail centers the Buckeye State had to offer. First stop: Westlake, outside of Cleveland.

It’s a term most often used to describe the leaping ability of basketball players, but it also describes the trait that set this pioneering town center apart from all the others when it opened in this Cleveland suburb in 2004. Developer Bob Stark’s inspiration for its design was re-creating the experience of shopping on Fifth Avenue in New York or the Magnificent Mile in Chicago.

“A lot of the experience there is in the windows. Everything happens on the sidewalk, and above are offices and apartments,” the Stark Enterprises CEO said.

Other town centers sought densification by parking themselves near residences and offices, Stark observed. There might be a second story above the stores in their streetscapes but no one living there, no one to visit the shops and stores and bars and restaurants on a daily basis. Then came Crocker Park.

“Crocker Park went all the way in a way no one else had before. We stacked different uses on top of each other, with day workers and residents doing everything in the same place,” Stark said. “That creates a positive tension that energizes a development.”

We approached the entrance to Crocker Park, set among nondescript suburban office parks, and had doubts about whether it could live up to its notices. Then we walked down Main Street past various storefronts and apartments representing architectural styles from different eras, as one would find in a real town. We saw residents rushing out on bikes and workers from the American Greetings headquarters (part of the development) strolling to lunch. We passed by storefronts you’d see in upscale bedroom communities—Barnes & Noble, Francesca’s, Raymond James, Lululemon, Banana Republic.

Standing in a light drizzle in the town square ringed by wrought-iron food kiosks that Stark imported from Italy, it hit like a lightning bolt. We turned to our Stark Enterprises guides Stacie Schmidt and Tina Roberts and said, “You know, if you picked up Crocker Park and plopped it in the middle of downtown Cleveland, it would be the most popular place in town.”