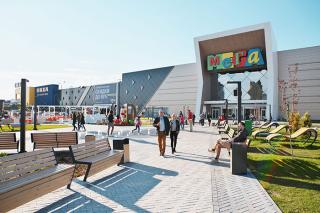 Can you name the biggest developer of Ikea-anchored shopping centers in Europe and Asia? If you answered the Sweden-based furniture retailer itself, reward yourself with an order of Swedish meatballs.

Fact is, many members of the U.S. retail community are unaware that Ikea owns and operates 45 centers in Europe, Russia, and China attracting, en masse, some 460 million visitors a year. The centers employ a common formula of an Ikea, a hypermarket, and a DIY box supporting a mall of brands including Apple, Tommy Hilfiger, Wrangler, and Kiehl’s, as well as Taco Bell and Panda Express.

“We’re not building centers in America, but we came here to meet more U.S. retailers and let more of them know about our centers. American retailers are a big reason for our success in Europe and Asia,” said Ikea Centres leasing manager Luc Mougel at the company’s booth at the RECon Show in Las Vegas in May.

“It’s a great outlet for them to sell overstock merchandise. Consumers in Europe and Asia are hungry for American brands,” he said. “Also, shipping costs are lower for brands that manufacture their products in Asia.”

Ikea Centres is itself in expansion mode, making its need for American retail brands all the greater. It has plans to build 25 more centers—ranging in size from one million to two million sq. ft.—which will increase its portfolio to 70 properties across 15 countries by 2025.

Ikea operates 14 centers in Russia under the name MEGA Mall and has plans for three new China centers in Shanghai, Changshga, and Xi’an.
Advertisement