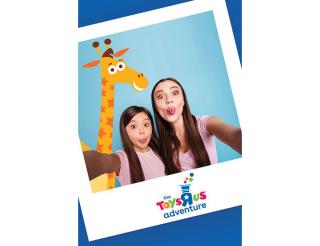 Toys “R” Us continues its comeback, this time with an entirely new kind of experience.

Tru Kids, the new parent company of Toys "R" Us, and Candytopia, famous for its experiential candy exhibits, have joined forces to open an immersive experience dubbed “The Toys “R” Us Adventure.” The new concept will debut in late October at Brookfield Properties’ 830 N. Michigan Avenue in Chicago, and at Edens’ Lenox Marketplace in Atlanta. The two locations will remain open through the holiday season before moving to other major U.S. cities in 2020.

Candytopia was created by candy artist Jackie Sorkin (star of TLC’s “Candy Queen“), events and production design expert Zac Hartog, and retail veteran John Goodman who serves as its CEO. It has opened limited-run exhibits in Santa Monica, New York and San Francisco. In 2019, it has opened in Atlanta, Minneapolis-St. Paul at Mall of America, Dallas and Houston, with additional cities to be announced.

The new concept will feature a series of interactive play rooms and installations featuring Toys “R” Us mascot, Geoffrey the Giraffe, and toy vendors such as Melissa & Doug and Spin Master’s PAW Patrol brand. In a release, the two companies described the concept as a “toy-filled playland with one-of-a-kind full sensory brand and play experiences where imaginations run free, toys are larger than life, and even the most serious adult can unleash their inner child.”

Similar to Candytopia’s installations, the Toys “R” Us concept will charge an admission fee of $28 for adults and $20 for kids (4 through 12). Children under the age of four will be admitted free.

As previously reported, Tru Kids and joint venture partner b8ta will open two Toys “R” Us stores later fall, at Simon’s The Galleria in Houston, and at Westfield Garden State Plaza in Paramus, New Jersey, with additional locations expected to open in 2020.

“The Toys “R”Us brand was built upon celebrating the joys of childhood and we are thrilled to partner with the creatives behind Candytopia to introduce an exciting new way to play for guests of all ages,” said Richard Barry, CEO of Tru Kids. “As we focus on bringing a reimagined Toys “R” Us to the United States, we believe this live experience coupled with our new experiential retail stores will attract families from around the world and create a unique opportunity to rediscover the magic of this beloved family brand.”
Advertisement