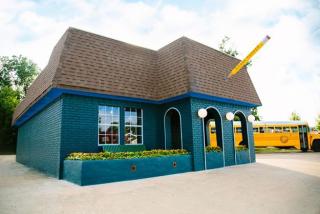 Warby Parker’s brick-and-mortar expansion is inching toward a big milestone in 2018.

The digitally native eyewear retailer plans to have nearly 100 stores open across the United States by the end of this year, according to CNBC, up from its current count of 64 locations.

The company, which opened its first store in 2013, has also tested pop-up shops, stores on wheels (in decked-out school buses) and other "mediums" to reach customers, CEO Neil Blumenthal told CNBC.

Since Warby Parker made the leap online retail, countless other digitally-native brands have followed suit, including Everlane, Casper, Untuckit, Allbirds, and Boll & Branch.