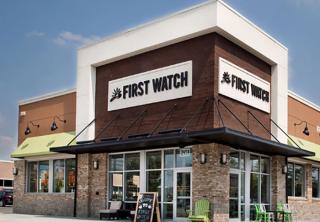 Breakfast and lunch restaurant First Watch is looking to eat competitors like Cracker Barrel for dinner with a new store concept and plans for expansion.

The Florida-based chain of 339 franchised and company-owned stores in 27 states plans to open at least 100 more of its “urban farm” concept restaurants by the end of 2019. The ultimate goal is 1,400 locations, First Watch director of real estate Matthew Livingston told a general session of attendees at the International Council of Shopping Centers’ regional show in Orlando on Monday.

Several design iterations are being used to interpret the concept, which embraces the farm-to-table trend in dining establishments. The stores favor clean modern lines in their interiors, liberal use of natural wood, and covered outdoor dining areas.

“We’ve made improvements in the quality and look of our food. Our goal is to have ‘Instagrammable’ food,” Livingston said. “So far, we’ve found that the concept appeals to both Baby Boomers and Millennials.”

In its expansion, Livingston said, First Watch was looking for 3,500-sq.-ft. spaces, preferably endcaps or freestanding units next to upscale retail.