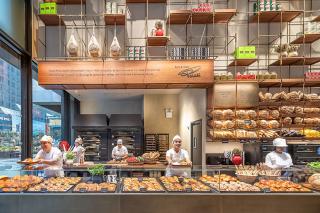 Starbucks Corp. is expanding its fledgling Princi format with an outpost in New York City.

The coffee giant’s third freestanding Princi location will make its official debut in a few weeks, on the corner of 51st and Broadway in Manhattan, just minutes away from bustling Times Square. A large window on Broadway provides passers-by with views of freshly baked items coming out of the oven.

In 2016, Starbucks announced that it had joined a global investment team – which includes Milan-based Angel Capital Management and Pekepan Investments – to expand Italy’s Princi into international markets. The company opened its first freestanding Princi in July, in Seattle. Last month, Starbucks brought the concept to Chicago, with a location in the city’s West Loop.

The New York store features the full Princi menu, starting with such breakfast items as baked eggs in a spicy tomato sauce to lunchtime items that include soups, salads, focaccia sandwiches, pizza, and hot entrees. A wider selection of Italian cakes, tarts and other desserts is offered in the afternoon. Later in the day, the on-site Bar Mixato will offer traditional Italian wine and beer and complimentary small plates. The signature coffee served is Starbucks Reserve Princi blend, along with a variety of other coffee beverages.

The Starbucks store design team took inspiration from Princi’s original Milan bakery, using natural materials and earth-colored stone. Many of the design elements, such as the hand-blown glass light fixtures, were selected for their high level of craftsmanship. A 20-ft. curated wall displays an array of colorful ingredients – from lemons and peppers to glass jars filled with tomatoes and olives – with a goal to enhance the “feast for the senses.”

The focal point of the space are two ovens, which allow for baking onsite throughout the day. A brightly-lit food case stretches along the width of the store, displaying baked cornetti, brioche and focaccia, pizzas, salads and desserts. The store also features a 20-foot communal table.

The new Princi stand-alone location offers a taste of what's to come later this year when Starbucks will open its Reserve Roastery New York in the city’s meatpacking district. It will also serve Princi food baked fresh on-site.