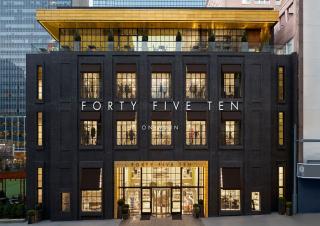 Forty Five Ten will open its first store on the East Coast, a 16,000-sq.-ft. location at Manhattan’s Hudson Yards, in March 2019. The upscale emporium will join Forty Five Ten’s five existing stores across Texas and California.

The design concept for the retailer’s Hudson Yards outpost was created in partnership with New York-based firm Snarkitecture. It echoes Forty Five Ten’s regard for the unusual design element. The multi-section store presents the brand’s evolving selection of emerging and pillar designers in women’s, men’s, home and beauty.

The New York location will be the second largest for the brand, following its flagship in downtown Dallas, which opened in 2016. The 37,000-square-foot, four-story Dallas store features three retail levels and a top-floor restaurant and lounge. Museum-quality art is featured throughout the space.

“New York is the shopping capital of the world, largely because of its diverse retail clientele and creative magnetism,” said Katherine Greenberg, COO of Forty Five Ten. “Hudson Yards brings these worlds together in one energetic hub, which was a compelling draw for us. The Hudson Yards location is a logical next step for our brand, as well as an inspiring one, and we couldn’t be more excited.”

Founded in Dallas in 2000, Forty Five Ten was acquired by Headington Companies in 2014.
Advertisement