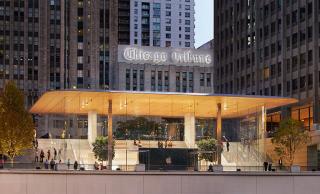 Apple has opened its newest and most transparent store to date, a 20,000-sq.-ft. glass showcase on North Michigan Avenue in Chicago.

At Pioneer Court Plaza on North Michigan Avenue in Chicago, Apple Michigan Avenue is designed to be a gathering place for the local community, and will host year-round events. The program kicks off with “The Chicago Series,” a set of five individual programs co-created with local non-profits and creative organizations. Each program focuses on a theme or project designed to make a positive impact in the community.

“When Apple opened on North Michigan Avenue in 2003, it was our first flagship store, and now we are back in Chicago opening the first in a new generation of Apple’s most significant worldwide retail locations,” said Angela Ahrendts, Apple’s senior VP of retail. “Apple Michigan Avenue exemplifies our new vision where everyone is welcome to experience all of our incredible products, services and inspiring educational programs in the heart of their city."

Apple Michigan Avenue adds new access to the Chicago River riverfront from the outdoor Pioneer Court plaza. The two are now linked by granite staircases on both sides of the transparent store, opening up views from the plaza to the river and beyond. Apple worked closely with the City of Chicago and referenced historical records to develop a store design specifically for the site.

“Apple Michigan Avenue is about removing boundaries between inside and outside, reviving important urban connections within the city,” said Jony Ive, Apple’s chief design officer. “It unites a historic city plaza that had been cut off from the water, giving Chicago a dynamic new arena that flows effortlessly down to the river.”

Every design feature of the store serves to minimize the boundary between the city and the Chicago River. One of the building’s most unique features — an 111-by-98 ft. carbon-fiber roof — was designed to be as thin as possible. (The roofline is curved in such a way as to suggest the lid of Apple's Macbook laptop.) The entire structure is supported by four interior pillars that allow the 32-ft. glass facades to remain unobscured.  The light-filled, clean-lined interior provides unobstructed views of the water. An expansive outdoor courtyard is open to the public at all times.

Apple Michigan Avenue, is the latest example of Apple's "town square" retail concept, which blend retail, education and community involvement. It is Apple's ninth store in the Chicagoland area.
Advertisement