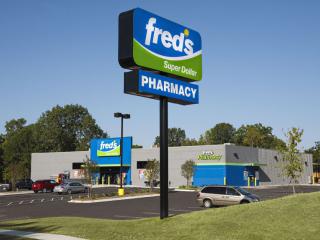 Fred’s Inc. is shuttering nearly 30% of its store fleet as part of its plan to turn around its ailing business.

The Memphis-based discounter plans to close 159 stores by the end of May, with the liquidation sales starting on April 11. Fred’s has partnered with Malfitano Advisors and SB360 Capital Partners to help manage the closings, which will leave the retailer with a total of 398 locations.

“After a careful review, we have made the decision to rationalize our footprint by closing underperforming stores, with a particular focus on locations with shorter duration leases,” said Joseph Anto, CEO, Fred’s. “Most of these stores have near-term lease expirations and limited remaining lease obligations.”

Fred’s also announced that it has hired PJ Solomon to evaluate “strategic alternatives.” The review will include a thorough evaluation of the company's current operating plan, as well as all other potential alternatives to maximize value for shareholders.

The retailer is also continuing to pursue the sale of its remaining pharmacy assets as part of its previously announced plan to unlock shareholder value by monetizing noncore assets. In September 2018, Fred’s announced an agreement with Walgreens to sell the pharmacy patient prescription files and related pharmacy inventory of 179 Fred’s stores located across 10 Southeastern states to Walgreens.

“There is still much work to be done with regards to our operations,” Anto stated in the chain’s earnings release. “We are continuing to execute against our turnaround plan, with a focus on bringing in talent, optimizing our cost structure and improving the front store business.”
Advertisement