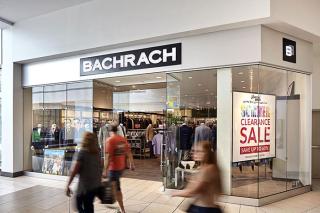 Bachrach is winding down its business — for good.

The high-end menswear brand is closing its remaining 14 stores that operate across eight states — Texas, Virginia, New Jersey, Tennessee, Michigan, Wisconsin, Indiana and Illinois — as well as its online store. Great American Group (GA) and Tiger Group are conducting the liquidations on behalf of the retailer’s creditors.

“Margins in the menswear sector have been shrinking due to declining foot traffic at malls, stiff competition from e-commerce retailers and significant shifts in consumer spending patterns,” said Scott Carpenter, president of GA Retail Solutions, the liquidator’s retail division. “Unfortunately, Bachrach’s store locations were unable to survive these competitive pressures, despite its strengths, such as high-quality merchandise and customer service.”

The chain, at one time, operated 32 stores.

Close-out sales in-store and online feature discounts of up to 50% off. Furniture, fixtures and equipment in the 14 stores are also available for purchase. Sales will be held over the next four-to-six weeks, according to the company.
Advertisement