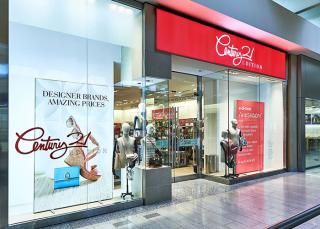 Century 21 has become the latest retailer to try on a smaller-sized concept.

Approximately 5,000 sq. ft. each, the stores feature a curated selection of designer women’s shoes, accessories, sunglasses, watches, handbags, and fragrances. The retailer described Century 21 Edition as a new strategy and said it will highlight a “best of the best” curated assortment of products.

“The goal of Century 21 Edition will be to showcase our most coveted merchandise, allowing us to quickly modify our assortment based on market demands,” stated Raymond Gindi, CEO, Century 21 Stores.

In a first for Century 21, the Roosevelt Field Mall location also features an optical boutique. The retailer partnered with Vision Express to offer an array of in-store optical services as well as discounted prescription frames from Tom Ford, Fendi and other brands.
Advertisement